Archives
« ‘Rogue One’ Tickets Are Going On Sale On Monday
Weekend Open Bar: It Was An Illusion. Even A Pleasant One For Some » 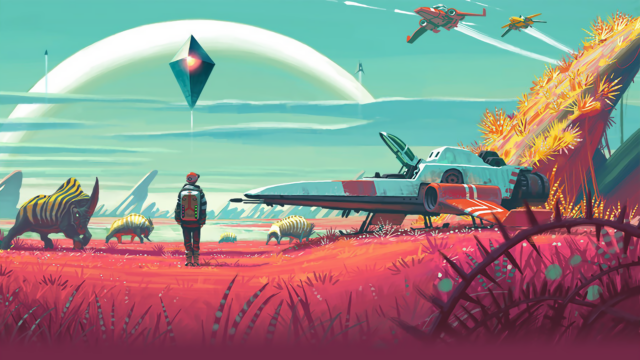 Apparently the minds behind No Man’s Sky felt like showing some Thanksgiving gratitude towards the thousands upon thousands of gamers who bought their title. ‘Cause the quiet-as-death studio broke its longstanding silence today to announce a “Foundation Update” that will lay the…uh…foundation for base building.

Nine weeks after No Man’s Sky’s 1.09 patch, Hello Games has announced that it will be releasing an update to the game “this week,” with “detailed patch notes” to follow “soon.”

This week Hello Games will be releasing an update to No Man’s Sky. We’re calling it The Foundation Update, because we have added the foundations of base building, and also because this is putting in place a foundation for things to come.

aDetailed patch notes will follow, and release will be soon.

Coming from five years of intense development, immediately after No Man’s Sky released the team spent six weeks updating the game with 7 patches across both platforms (the last of these was 1.09 on Sept 24th which you can read about them all here http://www.no-mans-sky.com/log/). These fixed many of the most common or critical bugs and issues post-release.

In the nine weeks since then our small team has been hard at work on development, testing and certification for the Foundation Update. It won’t be our biggest update, but it is the start of something.

The discussion around No Man’s Sky since release has been intense and dramatic. We have been quiet, but we are listening and focusing on improving the game that our team loves and feels so passionately about.

Positive or negative feedback, you have been heard and that will truly help to make this a better game for everyone.

This update will be the first small step in a longer journey. We hope you can join us.

While the cryptic announcement is short on details, Hello Games claims that this soon-to-be-released update will be only the “first small step in a longer journey.”

We’ve know about plans to introduce features like base building into the game for a while, but there hasn’t been any real timeline for when things like this would be added. The previous update, released at the end of September, tried to address a number of bugs that were hindering performance for players on PS4.