Elon Musk has outlined his plan to go to Mars 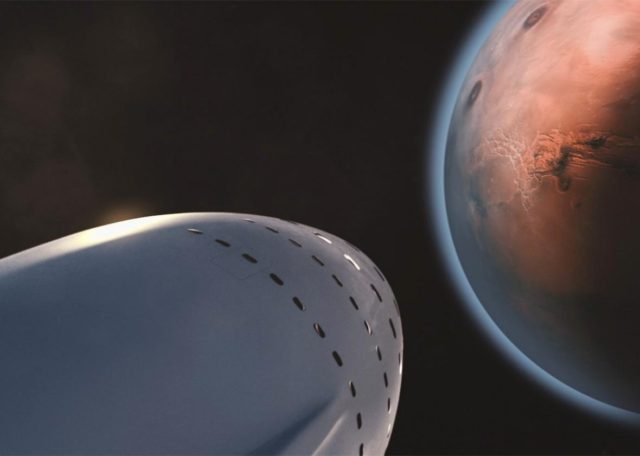 Elon Musk has been talking about going to Mars for a long, hot minute. However this week Musk dropped the details of said trip, and they’re equal parts well thought out and bananas. I’m providing you with this assessment though, so it’s worth remembering I’m a fucking idiot. So take it for what it is worth. You know?

Over at National Geographic, Nadia Drake‘s feature on Elon Musk’s plan for millions of people to live on Mars is the best explanation (and contextualization) of this far out vision that I’ve read. From Nat Geo:

The rocket would deliver the crew capsule to orbit around Earth, then the booster would steer itself toward a soft landing back at the launch pad, a feat that SpaceX rocket boosters have been doing for almost a year now. Next, the booster would pick up a fuel tanker and carry that into orbit, where it would fuel the spaceship for its journey to Mars.

Once en route, that spaceship would deploy solar panels to harvest energy from the sun and conserve valuable propellant for what promises to be an exciting landing on the Red Planet.

As Musk envisions it, fleets of these crew-carrying capsules will remain in Earth orbit until a favorable planetary alignment brings the two planets close together—something that happens every 26 months. “We’d ultimately have upward of a thousand or more spaceships waiting in orbit. And so the Mars colonial fleet would depart en masse,” Musk says.

The key to his plan is reusing the various spaceships as much as possible. “I just don’t think there’s any way to have a self-sustaining Mars base without reusability. I think this is really fundamental,” Musk says. “If wooden sailing ships in the old days were not reusable, I don’t think the United States would exist.”

“Elon Musk: A Million Humans Could Live on Mars By the 2060s” by Nadia Drake (National Geographic, thanks Tom Andres for the video tip!)