‘No Mario’s Sky’ is a playable game; better than Hello Games’ Effort? 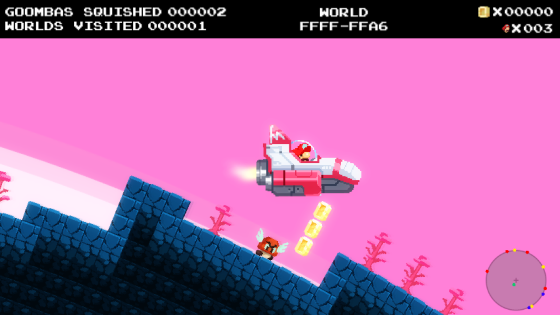 Incendiary, bullshit title. First that popped to mind, though. So whatever. Give me money and I’ll give you genuine effort in these headlines (no I won’t).

No Man’s Sky is an incredibly popular game about procedurally generated planets whose exploration, depending on your temperament, is either fascinating or tedious. Super Mario Bros. is a classic platforming game and a malleable template for endless homages, mashups, and commentaries. So if a crossover of the two didn’t exist, we would have to invent it. Fortunately, a small team of Australian developers released No Mario’s Sky late last night, after developing it over the course of 72 hours for the Ludum Dare game jam.

No Mario’s Sky is a game “featuring 1000s of Goombas, An Infinite Universe, Muscle Toad, ‘Original’ Music, ‘Faithful’ Physics, Social Commentary about Interplanetary Colonialism, and a Radical Space Ship,” as the release notes describe it. “No Mario’s Sky is the hackneyed remake-gone-mashup you’ve been craving.” In other words, it’s a procedurally generated series of Mario levels that take Mario into space, searching for his “princess on another planet.” Wired UK describes the gameplay in some detail, finding it interesting but sometimes clumsy and unforgiving.

If a procedurally generated Super Mario Bros. seems familiar, you may be rememberingMinecraft developer Markus “Notch” Persson’s Infinite Mario Bros., an IT University of Copenhagen experiment in level generation, or a Georgia Institute of Technology artificial intelligence program that actually builds Mario levels by watching YouTube videos of players. These projects were based on rearranging original game elements, though, not adding a new theme and artistic flourish. No Mario’s Sky may not play much like its namesake, or be nearly as ambitious. But in some ways, it captures the true spirit of No Man’s Sky: even if you never touch the game, the fact that it exists speaks well of humanity.