Official Look: Bill Skarsgård’s Pennywise from the upcoming ‘It’ movie 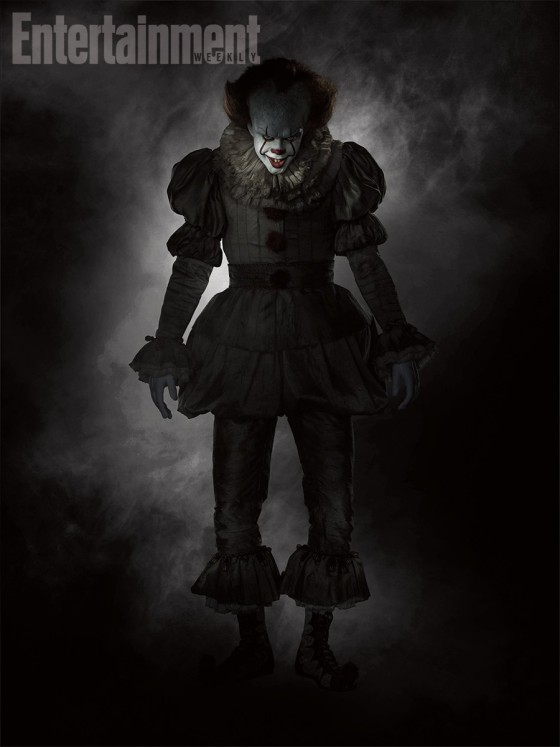 Director Andy Muschiettii is currently deep into filming his adaptation of Stephen King‘s It and he’s been sharing unofficial glimpses of the set (and a few key locations) over on his Instagram page. Today’s new look at the film is anything but unofficial. We sawour first look at Bill Skarsgård as Pennywise the Dancing Clown, the chief face of the film’s shapeshifting villain, a few weeks ago. But that deliberately cropped close-up has nothing on this new image, which reveals this fear-eating, kid-killing, monstrosity in all of his creepy glory.

This new look comes our way via Entertainment Weekly, who also spoke with costume designer Janie Bryant (whose credits include things you love like Deadwood and Mad Men). Since this creature is an ancient force not bound by our physical reality, Bryant spoke about creating a design that feels deliberately out of touch with the modern world:

The costume definitely incorporates all these otherworldly past lives, if you will. He is definitely a clown from a different time.

And so, ladies and gentlemen, meet the new Pennywise:

The Entertainment Weekly story linked above is full of great quotes from Bryant about the various choices made in designing this costume, but here’s one of them:

There is almost a doll-like quality to the costume. The pants being short, the high waistline of the jacket, and the fit of the costume is a very important element. It gives the character a child-like quality.

This new look is far cry from the Pennywise played by Tim Curry in the (beloved but not especially good) 1990 miniseries adaptation. That version was a fairly traditional clown, a colorful figure who looked like he had just walked out of a kindergarten birthday party. The version crafted by Skarsgård, Muschietti, and Bryant is more inherently sinister, with his old-fashioned wardrobe creating the illusion of a twisted, deformed body. He looks like he’s walked in from another time. This new shot also allows us to see just how large Pennywise’s head is – that is not the hairline of a human being.