SpaceX sending unmanned spacecraft to Mars as early as 2018 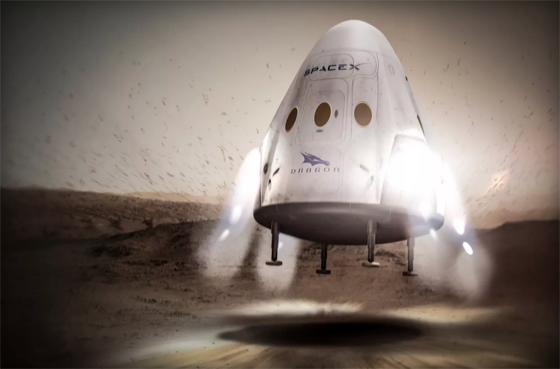 SpaceX is getting its ass to Mars. Or at least the ass of one of its unmanned spacecrafts.

SpaceX plans to send its Dragon spacecraft to Mars as early as 2018, the company announced today — marking a major first step toward CEO Elon Musk’s goal of sending humans to the Red Planet. The company didn’t say how many spacecraft it will send, but hinted it would conduct a series of these Dragon missions and that it would release more details soon. In a tweet, the company indicated that the capsules would fly on SpaceX’s Falcon Heavy rocket, a bigger version of its Falcon 9; the rocket will launch the capsules to the planet to test out how to land heavy payloads on Mars. If successful, the endeavor would make SpaceX the first private spaceflight company to land a vehicle on another planet.

SpaceX is sending what it calls the Red Dragon, a modified version of the spacecraft that the company uses to transport cargo to and from the International Space Station. The Red Dragon is equipped with eight SuperDraco engines that allow the capsule to land on solid ground, a technique known as a propulsive landing. The engines are meant to turn on during the Dragon’s descent toward the Martian surface, slowing down the vehicle’s fall and allowing it to land on ground in a controlled way. It’s similar to how SpaceX lands its Falcon 9 rockets post-launch.

Propulsive landings could be an efficient way to get large amounts of hardware down to the surface of Mars — something that NASA still hasn’t figured out how to do yet. Spacecraft returning to Earth have a thick atmosphere to help slow down their fall, but Mars’ atmosphere is just one-hundredth the pressure of Earth’s, providing less cushion for incoming vehicles and increasing the likelihood of a crash. So far, NASA only knows how to land 1 metric ton of hardware on Mars gently. The agency is working on an inflatable lander that could potentially land more weight, but testing of the vehicle has run into a few snags. In 2014, NASA explored the feasibility of using SpaceX’s Red Dragonconcept to land equipment on Mars and determined that the capsule’s landing technique could work. NASA also proposed the idea of using the Red Dragon to bring samples from Mars back to Earth, though SpaceX hasn’t announced plans of incorporating that idea into the 2018 mission.

These Red Dragon missions will be an important precursor to SpaceX’s long-term goal of setting up a Martian colony. Any human missions to Mars will require sending tons of equipment over first before people get there so colonists have all the supplies they need to keep them alive. The Red Dragon could be a crucial vehicle for transporting supplies to and from the planet. Musk has said that he will reveal the full extent of his Mars colonization plan this September at the International Aeronautical Congress in Guadalajara, Mexico, according to the Observer.