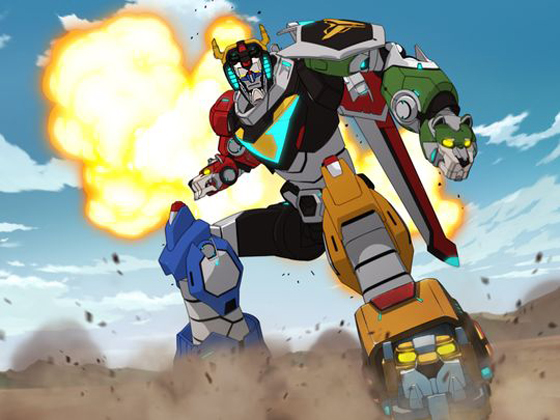 I missed Voltron. Just didn’t get into it. Not because I disliked it, just because it never came across my childhood’s ocular vision-plates for me to digest. But, I hope those of you who did watch the show back in the day enjoy this first look.

After teasing fans last month with the logo, Netflix has revealed the first image of the giant robot from its “Voltron” reboot, called “Voltron: Legendary Defender.”

The image arrives courtesy of USA Today, just before the first footage is screened Friday at WonderCon in Los Angeles. Produced by DreamWorks Animation, the initial 13 episodes are set to premiere later this year on the streaming service.

Adapted from a pair of anime series, the hit “Voltron” originally aired in syndication from September 1984 to November 1985, spawning a follow-up series and a seemingly endless parade of merchandise and tie-ins. An animated prequel of sorts, “Voltron Force,” aired in 2011-2012 on Nicktoons.

The new series will center on five Earth teens — Keith, Lance, Hunk, Pidge and Shiro — who become the last line of defense for Arus and other planets in an intergalactic battle against the evil alien force led by King Zarkon.

“We’re trying to keep as much of that classic feel to it as we can, because ultimately we have huge amounts of nostalgia for [the original] show,” Lauren Montgomery, co-executive producer, tells USA Today. Still, they’ve updated the concept, giving “Voltron” was the website describes as “an epic ‘Game of Thrones’ feel with some humor, and upping the danger level.”