Hideo Kojima and Norman Reedus (‘The Walking Dead’) reunite; game collab back on? 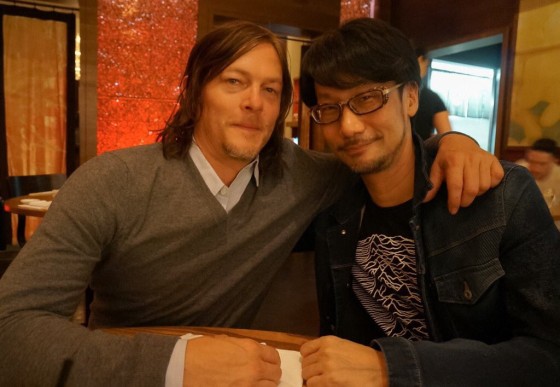 Hideo Kojima has reconnected with actor Norman Reedus, signaling that their video game collaboration may be back on after Kojima’s former employer abruptly shut it down almost a year ago.

Kojima tweeted this (in multiple languages, too) overnight.

Reunion with Norman Reedus. Giving update about my own company. pic.twitter.com/1yWMWWGT3q

Reedus, best known for his role as Daryl Dixon in TV’s The Walking Dead, had signed on as the lead actor for Silent Hills, a reboot of the horror franchise that was announced in the summer of 2014 with Kojima and Guillermo del Toro (Pacific Rim, Hellboy) directing.

However, in the spring of 2015, Konami suddenly announced that project’s cancellation, around the time the company started moving its focus from AAA games on PC and consoles to mobile and free-to-play titles. That also began the strange, public separation from Kojima, its most well known developer, which culminated in his December 2015 departure and formation of a new studio.

As for Del Toro? Significantly, he and Kojima will make a joint appearance at this week’s DICE Summit. The two will host a panel to discuss their creative visions on Thursday afternoon. That evening, Del Toro will present Kojima when Kojima is inducted into the Academy of Interactive Arts and Sciences Hall of Fame at the 19th DICE Awards.