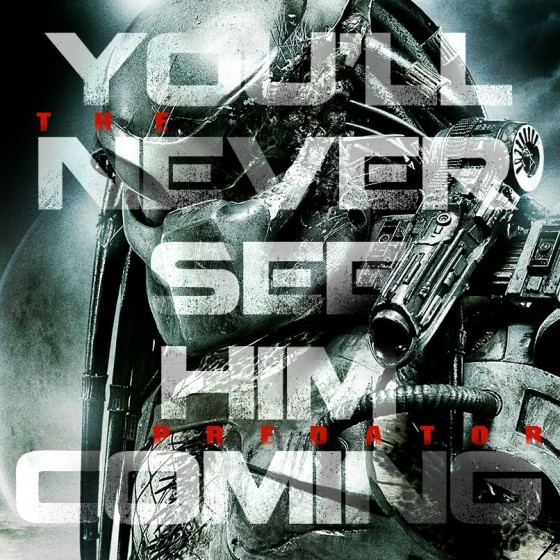 So, Predator is still a movie-thing. I had sort of completely forgotten that another installment was in the works. I will almost certainly forget once again by tomorrow.

Much like the tagline on “The Predator’s” latest teaser image, you probably never saw this coming.

The image, which appeared on the film’s official Facebook page, layers the phrase “You’ll never see him coming” over an image of the Predator. In red, it boasts text that reads “The Predator,” which may also hint at the title of the latest film in the “Predator” franchise.

Shane Black’s planned “Predator” sequel inched one stealthy step closer to reality in December, when screenwriter Fred Dekker revealed that the script has been turned in.

The “Iron Man 3″ director, who had a role in the 1987 original, signed on to the Fox sequel in June 2014, but there hasn’t been much public movement on the project since. However, franchise producer John Davis assured fans in August that the screenplay by Black and Dekker, who collaborated on “Monster Squad,” is “genius.”

Although initial reports referred to the new “Predator” as a franchise reboot, Black was quick to clarify that it’s an “inventive sequel”: “Why start over, when you’ve all this rich mythology yet to mine?”