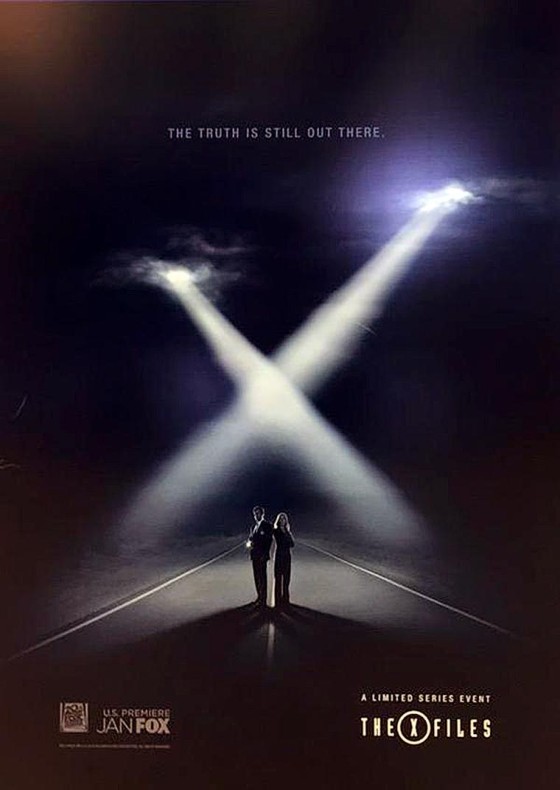 A poster for “The X-Files” has surfaced from MIPCOM in Cannes, France, where the Fox revival premiered Tuesday to an enthusiastic audience.

Although it’s not a high-quality image, we can see the poster embraces signature elements from the original series: David Duchovny and Gillian Anderson’s agents Mulder and Scully stand on a secluded road, beneath an enormous “X” formed by mysterious lights that pierce the night sky. Above it all are the words “The Truth is Still Out There,” a slight update to the classic slogan.

As we learned Tuesday, the six-episode miniseries will also feature the show’s original opening credits. “We thought about doing some changes to the original credits, but then it seemed like sacrilege,” creator Chris Carter revealed. “Those credits were on 202 episodes. They belong on these next six.”

He said the revival, which debuts Jan. 26 on Fox, won’t pretend as if time hasn’t passed since we last saw Mulder and Scully, in the 2008 film “The X-Files: I Want to Believe.” “They both have been on a personal quest,” Carter told the audience at MIPCOM. “Scully is still a scientist through and through. Her heart lies in reason and logic. And Mulder’s heart lies in the truth, and the answers lie beyond the pale, beyond the realm of what is accepted science.”

The “very brief Season 10″ may not be the last we see of “The X-Files,” Carter teased: “Mulder and Scully will be in wheelchairs before they are wheeled off-stage!”

“For the future of ‘X Files,’ if we are to come back, I think you’ll see us come back with these miniseries, if you will,” he said. “Special events. … We used to tell a story over a long saga, 22 to 25 episodes. Now the arc is much sharper, from one to six. So I think we pack a lot more in to these six episodes.”