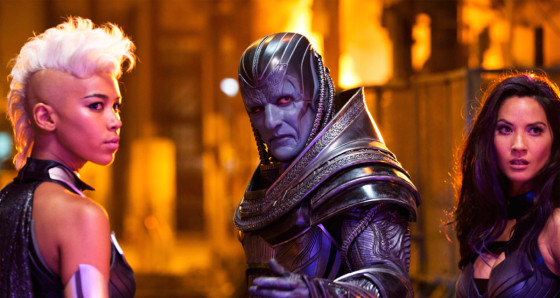 People really did not like their first look at Apocalypse. Calling him Mighty Morphin’ PowerDouche and such. Me? I dug deep into my rotting brain and recalled my dismay at Singer’s Quicksilver when he was revealed. Then I recalled how much I enjoyed him in the actual movie. So I was (and am) willing to not make a judgment on IsaacLypse until the movie itself. But a new picture of Oscapocalypse, and it’s pretty dang good. I must say.

With claims of “Ivan Ooze impersonator” still haunting the upcoming “X-Men: Apocalypse” following Entertainment Weekly’s photos from the film, a new batch of alleged images from the movie show an Apocalypse much closer to his comic book counterpart, and — if real — should effectively exorcise those complaints.

Posted in a series of tweets by X-Men: News, the images feature along with the titular villain a look at Archangel and Psylocke side-by-side with their stunt doubles and Jean Grey, Cyclops and Nightcrawler in costume. Sadly, in regards to the latter, instead of wearing blue and yellow spandex, they appear in Singer’s traditional X-Men garb of black, military-ish garb.