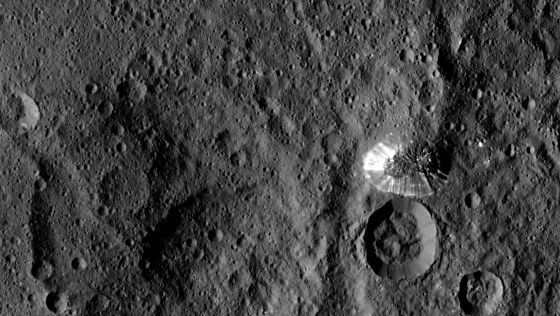 Check out this lonely mountain. NASA’s Dawn space-craft sniped a lovely picture of it, just chilling in the southern hemisphere of the dwarf planet Ceres. Beckoning to us across space and time. To travel to it, to scale the peaks, to meet the space-elves that run their futuro-city from the top of the summit. Right?

NASA’s Dawn spacecraft spotted this tall, conical mountain on Ceres from a distance of 915 miles (1,470 kilometers). The mountain, located in the southern hemisphere, stands 4 miles (6 kilometers) high. Its perimeter is sharply defined, with almost no accumulated debris at the base of the brightly streaked slope.

Tags: Dawn spacecraft, NASA, Space Images, space swoon, there are space-elves up there