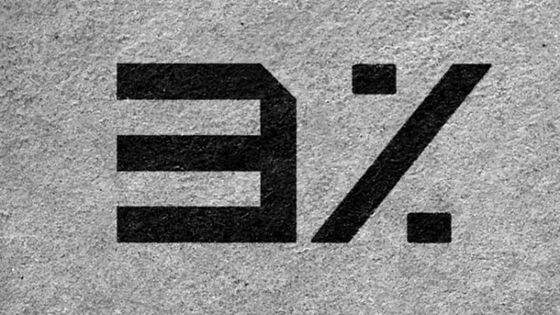 Netflix has itself an upcoming Dystopian show titled 3%. And the show, which is being developed entirely in Brazil, is aiming to stimulate all of my anarcho-rebellious glands.

According to the streaming company, the show will be directed by Cesar Charlone, known forCity of God and Blindness, will be written by Pedro Aguilera and will star João Miguel and Bianca Comparato. The show is expected to be available to viewers later in the year.

3%” takes place in a world where most of the population lives in “Hither”: a decadent, miserable, corrupt place. When people reach 20 years of age, they go through the “Process”, the only chance to get to “Thither” – the better place, with opportunities and promises of a dignified life. Only three percent of the applicants are approved by the Process that will take the applicants to their limit, putting them in terrifying, dangerous situations and testing their convictions through moral dilemmas.

This looks like it has the potential to be a really interesting show, and hopefully, it’ll bring some talent from the South American country to the attention of viewers around the world.