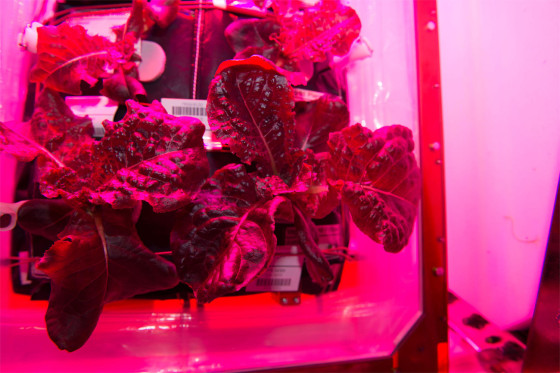 Terrible pun! But this is pretty gnarly. Astronauts aboard the ISS are eating the first space-grown vegetables today, in the form of some seriously red romaine lettuce. To space! To Mars! To Andromeda! With ruffage!

Members of the International Space Station Expedition 44 crew are undertaking a first for humanity: tucking into leafy greens grown right there on the space station, in Zero-G.

The orbiting laboratory has been hosting the station’s “Veg-01” experiments in growing vegetables in space since May 2014, when the first seeds were activated in the miniature greenhouse known as Veggie. These plants were watered, grown and matured over a period of 33 days aboard the ISS, and sent back to Earth for food safety testing.

The second batch of seeds, which had been on board the ISS for 15 months, was planted on July 8, 2015, and were again grown over a period of 33 days. It is this second batch that will be munched by the crew on August 10.

NASA researchers are hoping to determine whether these fresh vegetables have an impact on the physical and psychological health of the astronauts.

“There is evidence that supports fresh foods, such as tomatoes, blueberries and red lettuce are a good source of antioxidants,” said Ray Wheeler, lead for Advanced Life Support activities in the Exploration Research and Technology Programs Office at Kennedy.

“Having fresh food like these available in space could have a positive impact on people’s moods and also could provide some protection against radiation in space.”

This is important groundwork, not just for the future of the ISS, which would potentially require fewer supply missions if astronauts could grow their own food, but also for NASA’s manned Journey to Marsprogram, scheduled to take place in the 2030s and which would see astronauts spend at least a year on a round trip to the Red Planet.

Earth won’t be able to send resupply shuttles to the Mars crew, so they will need to be as self-sufficient as possible. And, if their mental health can be improved, both by fresh veggies and the presence of plants, which can boost mood levels, so much the better.

“The Veggie experiment is currently the only experiment we are supporting which involves evaluating the effects of plant life on humans in space,” explained Alexandra Whitmire, behavioural health and performance research scientist for NASA’s Human Research Program.

“Future spaceflight missions could involve four to six crew members living in a confined space for an extended period of time, with limited communication. We recognise it will be important to provide training that will be effective and equip the crew with adequate countermeasures during their mission.”

The other aspect of the program that could help maintain psychological health is the provision of a meaningful responsibility and occupation.

“The farther and longer humans go away from Earth, the greater the need to be able to grow plants for food, atmosphere recycling and psychological benefits. I think that plant systems will become important components of any long-duration exploration scenario,” said NASA payload scientist Gioia Massa.

“We hope to increase the amount and type of crop in the future, and this will allow us to learn more about growing plants in microgravity. We have upcoming experiments that will look at the impacts of light quality on crop yield, nutrition and flavour, both on Earth and in space.”

If successful, the research may have implications on Earth as well — it could be used in urban indoor hydroponic facilities, where electrical light is used to grow plants.