Archives
« ‘Ant-Man’ International Trailer: Our First Move Should Be Calling The Avengers
Watch: The Opening of ‘The Fresh Prince’ done in ‘Grand Theft Auto V’ » 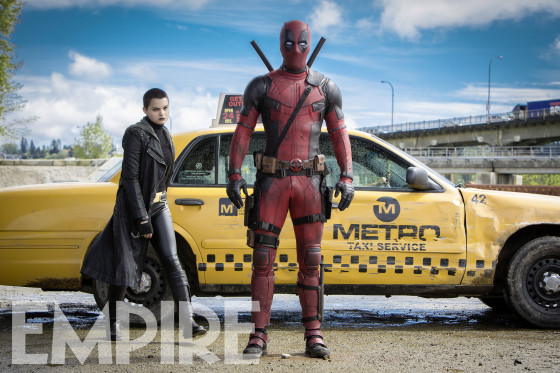 I’m really fucking excited for Deadpool. Between the new images that have dropped, and the news that the movie is going to be a Hard R, everything seems to be shaping up fucking mint for the movie.

Anyhow, much was made about the showcase film for “Deadpool,” Marvel‘s famed merc with a mouth, being R-Rated. Fans insisted it had to be made as such, as did the filmmakers —after all, the Deadpool character is super irreverent, dropping lots of F-bombs, and his exploits in the comics are very generally pretty violent.

The R-Rated conversation around the movie became such a hot-button talking point for fans that Reynolds went as far as to create an elaborate April Fool’s Joke earlier this year, telling fans that the movie would be PG-13, only to renege and say, “don’t worry, it will be R-Rated.”

And the filmmakers are really doubling down on the intensity of that rating. In today’s EW piece, which reveals a new Deadpool image you can see above, producer Simon Kinberg (“X-Men: Days of Future Past,” the upcoming “Fantastic Four”) says the movie will be explicit and earn its adults-only rating.

“Deadpool is a hard R,” Kinberg claimed. “It’s graphic. Nothing is taboo. You either commit to a truly outrageous boundary-pushing kind of movie or you don’t.” OK, Matthew Vaughn, you’ve been warned. But does that mean noxious, vile and corrosive in the way Mark Millar’s works often are? Let’s hope not.

First-time director Tim Miller points to a very different touchstone: a classic David Fincher film. “I felt ‘Fight Club’ and Tyler Durden were good corollaries,” he said. “We are in strip clubs and dive bars and crappy apartments and far away from the shiny ‘X-Men’ world.”