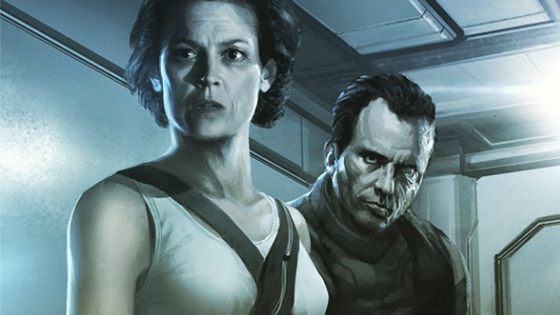 The press blitz for Neill Blomkamp’s Chappie has begun, and brings with it Director Nougats. One of the more intriguing little bits of pointless drivel to come from Blomkamp’s pressers so far is this: he’s like, totally, totally certain that Fox would make his Alien concept.

This year kicked off with a bang when District 9 andChappie writer/director Neill Blomkamp postedAlienconcept images to Instagram. The pics featured renderings of Sigourney Weaver‘s character Ellen Ripley, the Hicks character originally played by Michael Biehn, and images of the engineers’ ship from Alien housed in a giant hangar.

There wasn’t much explanation of the images: were they for a film, or maybe a game? Had Blomkamp created them on his own, or as part of a quiet deal that hadn’t leaked outside Fox? Now the director reveals the truth about his Alienideas — and he says that he could actually make the Alien movie heralded by the concept art. He just has to decide to do it.

Blomkamp talked to Uproxx, and the interview is surprisingly candid. The director explained that the art came out of a long-simmering desire to make an Alien movie.

Basically, what happened was, when Chappie got heavily into post-production, I could take my foot off the gas a bit. I was thinking about what I wanted to do next and I’ve been wanting to make an Alien film for like years and years.

The art came into being as the director was working on the post-process of Chappie, and he says we’ve only seen the beginning of it, teasing “I produced way more art than I put out.”

This all came about thanks to working with Sigourney Weaver on Chappie, which comes as a surprise to no one.

Speaking to Sigourney Weaver, when we were doing Chappie, she set off a bunch of thoughts in my head — I had come up with an idea that didn’t have Sigourney, it was a different idea. But I spent all of the shooting time with her, it was like, holy shit, that could actually be really interesting. When I came back to Vancouver, I had an entire year to work on Chappie. And when I wasn’t needed in the edit, I could think about Alien. So, I basically developed an entire movie and I did all of this artwork as well.

Blomkamp says he’s not giving up on the idea, and that Fox isn’t the roadblock to making it happen. According to him, it’s his own attitude about doing a franchise movie that keeps things at the theoretical stage. (“Sometimes Hollywood just sort of gets to me.”) If he gets his head around making it, Blomkamp says it’s a go.

Seriously, he’s certain about this:

Consider me sold. That concept artwork was dope.