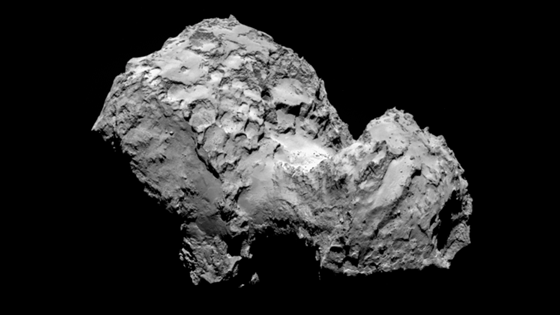 This is certainly with its understandable set of caveats, but fuck. Rosetta’s lander which is currently hanging out sort-of-dead on a comet has none the less come back with some fucking finds, man. Like, organic molecules up on this mofuckah’.

Philae, the probe that landed on a comet as part of the Rosetta mission, has detected organic molecules in the comet’s atmosphere. We don’t know exactly what the molecules are yet, but they could hold a key to early life on Earth. Hell, this is a big reason we sent Rosetta all the way to a lonely comet in the first place.

Organic molecules are those that contain carbon. We, being carbon-based life forms, are all made of such molecules, but organic molecules may actually have extraterrestrial origins.Simulations have suggested that ultraviolet radiation bombarding icy particles can form organic molecules out in space. In turn, comets could have brought those molecules to Earth, providing the raw materials for life on our planet.

The Rosetta team was expecting to find organic molecules on the comet, but didn’t—and, as yet, still don’t—know exactly what kind. It could be simple organic molecules like methane, which would confirm what what we’ve observed about comets from afar. Even more exciting would be complex ones like amino acids, which are the building blocks of proteins. Amino acids made of the exact same atoms can be mirror images of one another, either left-handed or right-handed. It’s long puzzled scientists why the majoriy of amino acids on Earth are left-handed—perhaps this imbalance can be traced to the amino acids found on a comet.

To get a complete picture, scientists will need to analyze samples from beneath the comet’s surface, too. The experiment to drill into the comet and analyze samples seems to have failed. There might be another chance it Philae gets more sunlight as the comet speeds toward the sun. Meanwhile Philae has gone dark, but scientists are still hard at work analyzing the data it sent back.

Goddamn sick. Like, this is the sort of stuff that really makes my taint glisten with cosmic glee. Just what the fuck is going on out there and what does it mean for us?