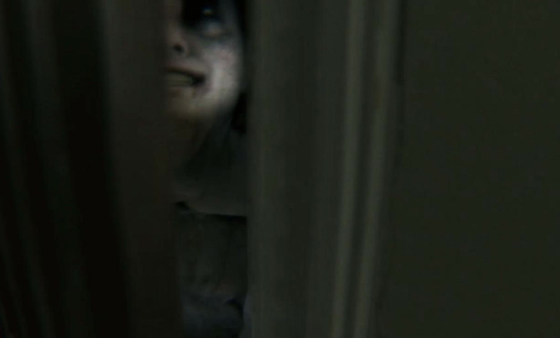 This shit should be called PTSD.

Trauma describes rather accurately the state that I was in after an evening with P.T. – an “interactive teaser” released into the wild via the PSN yesterday. I found myself unable to play this sample-sized preamble to a new Silent Hill project for more than 30 seconds at a time before escaping to the serenity of the PS4 home screen with a tap of a button. I marvelled at how we didn’t really have that escape method when playing a horror game back in the day.

And by back in the day, I’m referring to my night with Silent Hill 3, and a certain, terrifying scene in a dilapidated hospital room where some nightmare clone stepped out of the mirror and proceeded to chase me, and my only reaction was to turn my PS2 off and flee my pitch black living room. It was a flight-or-fight response, and it was to a video game.

I think I experienced a mild version of that at least five times over the course of one hour  last night. Even after my boyfriend joined me on the couch, with the lights on in the neighbouring kitchen. Even then, this experimental, bite-sized entry into horror gaming got me. It got me good.

More than just the delicious horror this visits on gamers, it’s the insidious marketing methodology behind this release, as well as the ensuing conversations online for the past 24 hours that have grabbed me. This little teaser wormed its way into the online gaming consciousness, and I’m fascinated by it.

As a long-time fan of classic Silent Hill games, I’ll admit that I only really bit into P.T. after learning that it was a secret front for revealing a new Silent Hill game, dubbed “Silent Hills”, a joint project between game director Hideo Kojima and film director Guillermo del Toro.

As a marketing effort, I think the collective voice of the internet has decided P.T. was rather brilliant. A teaser demo – not even representative of the final product, but just designed to show what the team behind Silent Hills is capable of – and a demo which isn’t even immediately obvious as a part of the final product’s marketing campaign, which is then used to formally announce the game for the first time.

When was the last time a game was announced via Twitch stream? A user streaming her experience with the game was the first to document the secret, short trailer at the end of P.T..

Kojima, at a Gamescom presentation today, rounded out the first 24 hours of P.T. by claiming that the final puzzle in the short horror experience was designed to be insidiously obtuse, such that he didn’t even think it would be solved for at least a week. He also dished some more on what PT is, and isn’t, and what he expected out of this novel approach to announcing a game. Points to discuss:

1. His first implication is that there’s actually a solution to P.T.; most gamers chatting online since P.T. release had collectively decided that reaching the end of the teaser was seemingly random. Until this moment, there isn’t yet a precise breakdown of what needs to be done to complete the experience. Players seem to be stumbling upon it without understanding how.

2. Watching these users flail about through trial-and-error over the past day has been fascinating in itself. Some are sure it’s related to doing certain things in a specific order. Some are sure that the dialogue at the end of the teaser – “You are chosen” – implies that Konami ninjas are watching on the other end, and are selecting some users as ‘winners’, leaving others scrambling for forums and twitch feeds to find the solution themselves.

3. Isn’t this type of collective communication effort online somewhat evocative of the kind of mass-multiplayer gaming that Peter Molyneux’s recent projects were supposed to espouse? I can’t remember any of them generating the same kind of furor as this game.

4. Would anyone have cared as much about P.T. if it hadn’t been an announcement ‘vector’ for a Silent Hill game?

5. Kojima also revealed that the visuals in the game – built on the Fox Engine, also in use for MGSV projects – were deliberately dialled down to make P.T. look more ‘indie’, and throw people off from guessing at its ‘AAA’ pedigree. We rike it, Kojima-san. The game’s lighting is spectacular, photo-realistic. The prevalence of jaggies and other low-res elements fall more in line with his strategy, however. It’s still gorgeous to look at, and a little terrifying that this is ‘dialled down’. What will Fox Engine look like at its full potential?

I found myself pretty consumed with thinking about this little teaser for the past 24 hours. It’s a novel way to announce and market a product, but also a shockingly well-realized bite of horror. While some users, including myself, are frustrated by the lack of clear directions and steps in the game needed to proceed, the experience of living in the space of the game – its one, terrifying hallway of potential – was enough to convince me that real horror is coming in the final product.

They achieved something incredible using just the one hallway and its adjacent rooms. The first-person perspective, the limited mobility, the notion of experiencing the same, claustrophobic space which somehow changes on every ‘loop’ or new visit seems deliberately evocative of the similar ‘Room’ segments in Silent Hill 4: The Room, segments occluded by the game’s frustrating and tired core gameplay sequences.

The lack of ‘go there, do this’ linear gameplay design in P.T. is exciting. It’s frustrating, because we’ve gotten used to games yelling at us to go from Step 1, to Step 2, to Step 3 for success, and loot, and rewards. I’m trying to get past that frustration myself, trying to force myself to recognize that the guesswork involved in P.T. is good for games.

My time, like most (pretend-)adults has become more precious to me; I like the ‘go there, do this’ approach to gameplay, because it feels like I get more bang for my buck. But I can’t help but feel P.T. is going to be good for my hobby; I want to get lost and frustrated again. I want the unknown to take me over in a game once more.

More than P.T. itself, I’m fascinated by the conversations its inspired online since its release. What were your experiences with it like?