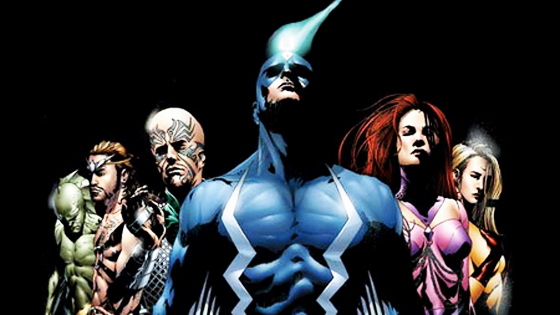 Inhumans is coming! Inhumans is coming! Marvel’s done it right, man. Slowly building up the fantastical elements of their cinematic universe. From a guy in a robot suit to a fucking talking raccoon, all of it was laid down progressively. Now, with the Tree and Homicidal Raccoon firmly entrenched in many people’s hearts (hi!) it makes sense that Marvel is going to push the cosmic even further. Why the fuck not? They’ve seeded the ground well enough.

With Marvel having set a slate of release dates through 2019, now they’ve got to figure out what those movies will be. Stuff like “The Avengers 3” and “Doctor Strange” seem inevitable, but there a handful of long developing projects that may finally see the light of day. Will “The Inhumans” be one of them?

The last we heard about the comic property was nearly a year ago, when it was rumored that “The Inhumans” was something Marvel was considering for a feature film treatment. But frankly, that’s been the case since at least 2011. However, today comes news that “The Inhumans” could actually be much farther along than most realized.

Collider reports that Joe Robert Cole (“Amber Lake”) has turned in a script Marvel likes for “The Inhumans,” and they are now going out to filmmakers. And much like “Guardians Of The Galaxy,” they expect that whichever filmmaker takes it on, they’ll add their own imprint on the material, in the same manner that James Gunn did (or Joss Whedon and “The Avengers” for that matter). In short — they aren’t messing with a lucrative formula, that also has so far shown that audiences love team-up movies.