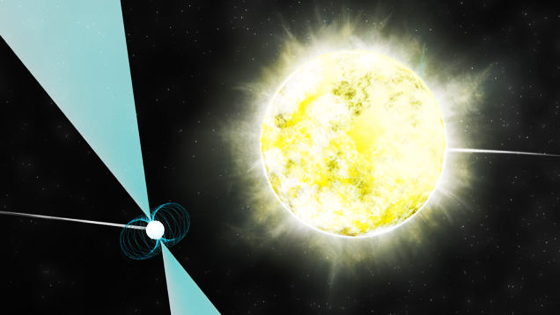 Man! Astronomer Wizards. Just finding shit in space. Wild shit. Diamonds the size of Earth. Or they could be lying. Truthfully I’d have no fucking way of knowing. But I like the idea of living in such a Universe with gnarly shit like this floating around space.

Astronomers have detected an ancient stellar remnant that’s 10 times fainter than the dimmest white dwarf ever discovered. Fortuitously orbited by a pulsar, this cold and collapsed star consists of crystallized carbon — essentially making it an Earth-sized diamond in space.

Indeed, this white dwarf would have never been discovered if it hadn’t been for the pulsar that spins around it.

White dwarfs are stars in their end-state — extremely dense and compact objects that have collapsed to form an object approximately the size of Earth. Packed with carbon and oxygen, they burn at an agonizingly slow rate, requiring billions of years to fade away. In fact, this particular white dwarf is estimated to be about 11 billion years old, which is the same age as the Milky Way. On their own, these objects are incredibly difficult to detect owing to their low intrinsic brightness. [io9]