Amazon gets into cellphone game with ‘FIRE PHONE.’ 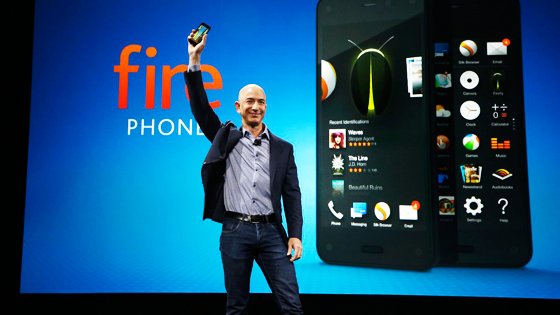 This Amazon Fire Phone is fucking wild, man. Offering up all sorts of things you probably never wanted in a phone. And unlimited storage for photos, which is actually something that sounds pretty neat. But the rest? I don’t know. An app that turns it into a hot plate for coffee? Eh. Toggle that increases the radiation so you can kill your own cysts? Meh. Do we really need these?

The Fire Phone is Amazon’s first foray into the smartphone market, announced today at an event in Seattle. The Fire Phone has a 4.7 inch Gorilla Glass display and an HD resolution screen, as reported by Engadget. It has a 13 megapixel, rear-facing camera with a dedicated camera button, plus unlimited cloud storage for photos. The Fire Phone comes with a rubberized frame, aluminum buttons, a quad-core 2.2GHz processor, Adreno 330 GPU and 2GB of RAM.

The Fire Phone has dual stereo speakers and support for virtual Dolby Digital Plus surround sound, plus Amazon’s free, 24-hour Mayday customer service program. A new feature for the Fire Phone is Firefly – using the camera, the phone will recognize games, books, DVDs, phone numbers, QR codes, art, CDs, URLs, bar codes and other scannable items. Users will then be able to purchase these items directly from Amazon with the tap of a button. From the sound of it, Amazon’s Firefly could be super-effective.

The Fire Phone also has a 3D interface with a head-tracking system called Dynamic Perspective, which can be used for games.