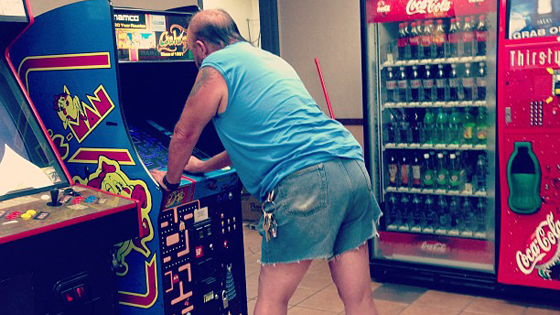 It’s summer, friends. That can only mean one thing. It’s time for people to shed their long-legged genital containers in lieu of something sexier. More airy. Let the wind-flow, to at least attempt to keep the uncomfortable grime from building up against their sex-parts. ‘Cause while you may have your fetish, I don’t like being tongue-deep in testiclelabial grime when I’m pleasin’ my mates across the Universes.

Many people have spoken out against Jorts. In fact, this sort of disagreement is popular across the Universes. Through a coordinated PR marketing firm and coded messages in our fluoride-infused water, the Anti-Jorts Coalition has convinced the Weaker Minded that Jorts are not cool. Nay, some are even convinced that they are ugly. Well, these people probably believe in Democracy and Santa Claus, too. That’s how powerful the Mind Control is that the Powers That Be Wield.

Let me emphatically tell you: Nothing can be further from the truth. It’s time, friends. Time to stand up against the Anti-Jorts Coalition that is threatening to destroy our Great Universes.

It won’t be easy. I promise you.

In fact, it was this disagreement that nearly sundered the One Great Relationship of my life. My fiancee does not like Jorts. She abhors them. There was a time when I was forging a pair of Jorts under the Crucible of Scissors and Masculine Ripping. She looked aghast. “Babe,” she said. “Babe, stop. You can’t wear those in public.”

I was momentarily enraged. Not at her –no. I was enraged at the Anti-Jorts Illuminati that has struck at the heart of even a pure soul like hers. I stammered. I looked her deep in the eyes, opening up my Second Sight. Through Psychic-Sonic purging, I cleansed her brain of the programming. The cost was tremendous to us both. But at the end of the day, my Main Babe was saved. It was wonderful. Unfortunately my Psychic-Sonic purging is not something I can afford on a Telepathic-Telekinetic level to apply to every wayward Brain-Plate. The cast is too high. The mana too costly. And GODDAMN that Anti-Jorts Illuminati, such maneuvers have been prevented from being transmitted via electronic device. The Flat Screen TV? The Internet? Measures designed to prohibit Mass Psychic-Sonic Purging.

This is the most important thing to understand. The Powers That Be, the Powers That Lurk On Mars under the terraforming initiative helmed by Bill Gates, Rob Schneider, and the Secretly Alive Steve Jobs, absolutely do not want the average human to be wearing Jorts. Why? Why you ask? It’s simple. True ultimate power. True ultimate enlightenment.

The true ultimate power comes from the freedom that Jorts provide. They are less restrictive on the body than average Khaki shorts. This is obvious. The denim allows for an array of sick kicks, punches, and drop-kicks to be administered at any moment. The Anti-Jorts coalition doesn’t just seek to end the greatest piece of clothing ever. No. They hate Democracy, Pizza, Gender Equality, and Your Sports Team. They favor the New World Order, Rampant Imperialism, and Ultimate Eugenic Culling of the masses. Should those who wear Jorts be accosted by these feckless, spineless idiots, the dazzling display of self-defense would thwart these secret Reptiles. Easily.

But it isn’t just physical power.

The Jorts were founded by Dr. Von Rubberneck during secret experiments in the 1930s on the Dark Side of the Moon. They vibrate at a frequency that allows for a demonstrable amount of psychic powers, such as my aforementioned Psychic-Sonic purge of mind-control. They are seamless amplifiers of the Human Brain’s 100% capacity. Those who laugh at that “The Humans Only use 10% of their brain” claim as poor science? Anti-Jorts Illuminati. Von Rubberneck was seeking to design a way to stop the Illuminati-Powered Nazis from taking over the world.  A collection of Jorts-Powered infantry is what actually stopped Hitler. Hiroshima? False Flag. Ask Alex Jones. The Good Doctor was momentarily successful, but ever since then the Illuminati has done the obvious: attacked the people with more subtlety. Through advertising. Media. You’ll seldom see Jorts, if not to demean them in the eyes of others.

Without Jorts, we Humans cannot wield our Psychic-Psionic attacks. We cannot purge one another’s minds. We cannot repel the forthcoming War, friends. The War for more than Fashion. For our Minds.

That leads me to my final piece. Jorts provide True Ultimate Power, designed to thwart the Anti-Jorts Illuminati coalition. The sesequencing between Jorts with our minds–nay–our Astral Selves–also provides True Ultimate Enlightenment. Not only can those of us who sport Jorts dispatch any errant Reptile Forces with our kicks, punches, and Psionic Blasts, but we can also see beyond their lies. We can realize the endless game of capitalism, sexism, racism, and war mongering is nothing more than the Cage that places us in our Khaki-clad prisons. With our Jorts protecting our body, we can protect our mind. Reflect upon the Intangible Truth of the Universe that a Jorts-Wearing Socrates once spoke of. We can Project our minds into the futures of the Universes and see the potential for humanity, for all of carbon, and non-carbon (the variety of life would blow your mind) existence.

Tags: damn the man, duh, fighting nazis, genital grime, it's obviousl, Jorts, secret bases on mars, Socrates, the dark side of the moon, The Illuminati