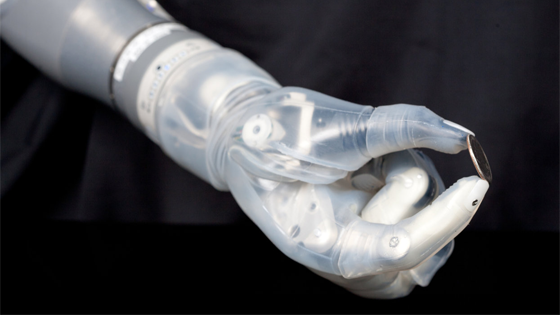 The future is now-now-now! Concerned about getting your fucking arm lopped off by your Dad in a lightsaber battle? Good fucking news! The inventor of the Segway has just gotten approval from the FDA for his mind-controlled prosthetic arm.

Nearly eight years ago, DARPA, the US Defense Department’s advanced research agency, set out to find a better solution for amputees than the metal hooks still widely used today. Now, the Food and Drug Administration (FDA) has granted its approval to one of the projects that came from that effort: a mind-controlled prosthetic limb called the DEKA Arm. A number of other scientists and engineers around the world are working on similar devices, but this is the first such prosthetic to get FDA approval. The prosthetic device comes from a company founded by Segway inventor Dean Kamen, and it is roughly the size and weight of an adult arm.

The arm is controlled by electromyogram electrodes placed on the remaining portion of the human arm. Those sensors pick up electric signals from muscle movements in the upper arm, and a computer in the robotic arm can tell what type of maneuver the user wants to make. The results are impressive: with the arm, amputees in clinical trials were able to perform tasks once thought impossible for a prosthetic limb. They could use zippers and keys, and — thanks to vibration feedback at the base of the prosthetic — they could pick up objects like grapes and eggs without crushing them. [The Verge]