Archives
« Space-Ship Omega: Reconnect
PlayStation 4 got a TWO-MILLI CONSOLE LEAD on the XB1. »

‘ROBIN RISES: OMEGA’ could see the return of DAMIAN WAYNE 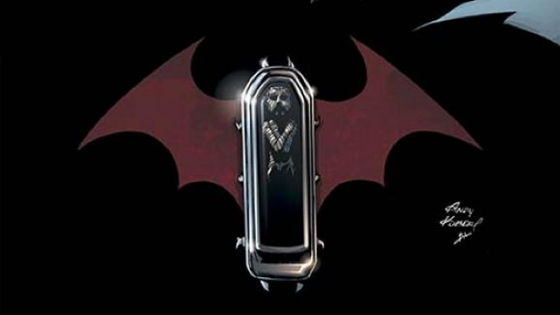 Damian Wayne! Motherfucker was dope as fuck, slapping around foes with Daddy, and flaunting his superior genes. Then they killed his ass off. However, it looks like he is going to be coming back from the grave. Like every other comic character. Ever.

If the preview images for DC Comics’ new Robin Rises: Omega one-shot, which hits stores July 16, indicate what it looks like they’re indicating, then Damian Wayne‘s comic-book death will have lasted just a bit less than 17 months.

The writer of the book, Peter J. Tomasi, wouldn’t tell Hero Complex exactly which Robin is returning, but since almost every other Robin seems to be alive, well, and doing other things (with the exception of Stephanie Brown, who’s in sort of a gray area), Damian seems to be the prime suspect, especially considering that Ra’s al Ghul plays a major role in the one-shot.

In addition to the Robin Rises one-shot, which features art by Andy Kubert and Jonathan Glapion, the name Robin is permanently returning to the title of Batman and Robin, which for the past several issues has served as a team-up book with other characters’ names going in the second spot.

“Let’s just say that we are most definitely bringing back a Robin for Batman’s 75th anniversary,” Tomasi told Hero Complex. “Batman needs a Robin and Robin needs a Batman.” He also said that the seeds for Robin Rises were planted in his first arc on the Batman and Robin book.

Not only will Ra’s al Ghul be involved in Robin Rises, but Apokalips, the home planet of Darkseid, will also be involved. Specifically, the Chaos Shard.

“When it comes to something as powerful as the Chaos Shard, who knows what possibilities may present themselves,” Tomasi said.

The last readers saw Damian (outside of the Elseworld-style Damian: Son of Batman series), he was killed by his clone, the Heretic, in the pages of Batman Incorporated #8, which came out in February 2013. The final page of that series’ concluding issue, #13, revealed that Ra’s al Ghul is harboring a stockpile of Damain clone embryos.

Provided Damian does return in the comics, the timing will be apt. The animated adaptation of Grant Morrison and Andy Kubert’s “Batman and Son” storyline that introduced the character, Son of Batman, is set to arrive on home video on May 6. [Comics Alliance]