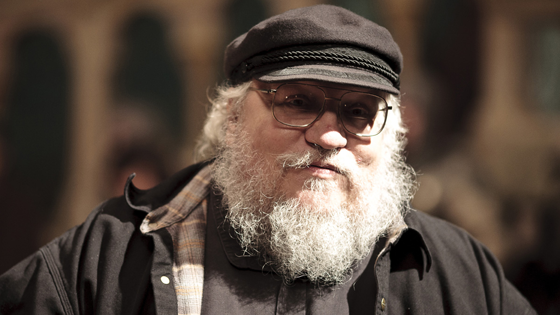 You have to love George R.R. Martin, and his dripping diaper. Dude seems to be crapping his pants over the fact that Game of Thrones is catching up to his series. Instead of actually, you know, writing the next novels he seems to be coming up with a litany of ideas to cover his ass in case (NAY, WHEN) the television show burns through his material. His latest proposition? A movie.

With the fourth season of Game of Thrones about to premiere on HBO, talk about the end of the series is revving up once more. Story creator George R.R. Martin has penned five novels in the ‘A Song of Ice and Fire’ series, and this fourth season adapts the second half of book three, A Storm of Swords. With two books left to publish and no reliable publication timeline in place, how will the series line up with the end of the books? One option that has been discussed, says Martin, is a Game of Thrones movie to wrap things up.

It all depends on how long the main series runsDo we run for seven years? Do we run for eight? Do we run for 10? The books get bigger and bigger (in scope). It might need a feature to tie things up, something with a feature budget, like $100 million for two hours. Those dragons get real big, you know.

The show’s writer/producers David Benioff and D. B. Weiss recently said there was a plan for seven or eight seasons, which would rely on a brisk adaptation pace and could well end before the final book is on shelves. They know how Martin plans to end it, and so there could always be a conclusion for the series before the novels are even done. The show can’t go on forever, and can’t take extended breaks, as the young actors will quickly age out of their roles.

(This happened with the original serialized publication of the Akira manga, which ended after the film was released.)

Whether the film would be based on one of the ‘Song of Ice and Fire’ books remains to be seen — assuming it happens at all. Martin said there’s a possibility that the three Tales of Dunk and Egg prequel novellas, which take place in Westeros 90 years before the primary storyline, could be the source.

They could be the basis for (a film). I have written these three stories, and I have about a dozen more. [/Film]