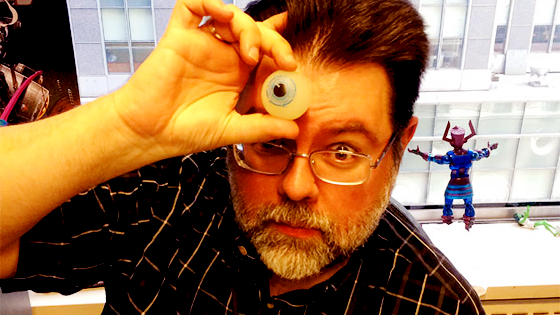 Here’s a promotion for you. In an effort to promote their mini-series-mega-time-event Original Sin, Marvel is giving out eyeballs. Word, eyeballs. Pop into your LCS, grab some funny books. Snag an eyeball. Bounce it down the street while yelling “THEY HARDLY EVEN RESISTED!”

Considering that Marvel’s Original Sin begins with the discovery on the moon of the Watcher’s body, minus his eyes, it’s perhaps unsurprising the publisher opted for a somewhat ghoulish way to promote the upcoming event series in comic stores: Marvel-branded bouncy balls that resemble Uatu’s missing eyeballs.

And given that writer Jason Aaron teased last month, “Whoever holds one of the eyes is able to explode a bomb full of secrets and unleash all the various secrets of the Marvel Universe into the wild through that eye,” it seems only fitting that Marvel Senior Vice President Tom Brevoort, keeper of many of those secrets, has been spotted with one of the missing organs. There’s no telling what may come of this …

The eight-issue Original Sin debuts in May. [Robot 6]

Speaking of Original Sin, are you folks going to snag it? I’m inclined to for two reasons. First: Jason Aaron. Second: I love a good murder mystery. You?