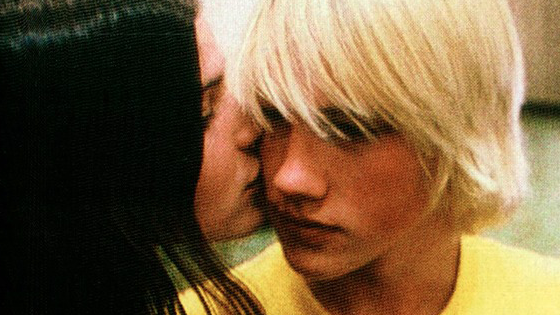 Friend of the site — nay! — friend of the Brothers Omega in general Patrick Cooper is undertaking a pretty gnarly task. Said Cooper wants to analyze how “real-life tragedies brought about a paradigm shift in the way films about school violence focused their narratives”, which sounds incredibly delicious in a mind-stretching wanky sort of way.

Coop hopes to translate this son of a bitch into a book, and God love him I hope he does. Hit the jump  a taste his analytical aspirations.

When Eric Harris and Dylan Klebold murdered 12 students and one teacher at Columbine High School on April 20, 1999, the media and parents quickly called attention to the boys obsession with the film Natural Born Killers (1994). As they were planning the attack, the boys gave it the code name “NBK” and they had memorized the film’s dialogue verbatim. It was also noted that the boys had seen The Basketball Diaries (1995), which includes a fantasy sequence where Leonardo DiCaprio (wearing a black trench coat) shoots his classmates with a shotgun. Other factors were also explored, including the boys’ taste in music and the social climate in Colorado, and quickly the debate over the influence of violent media erupted.

It wasn’t a new debate by any means. I vividly remember the whirlwind of controversy surrounding the first Mortal Kombat video game upon its release in 1992. Kids in middle schools across the country were trading the infamous “blood code” (that unlocked the game’s graphic mode) like it was currency. Violence in film and its influence has been analyzed since a gun was fired directly at the camera in The Great Train Robbery in 1903. The gangster pictures during the pre-code era of the 1930s then left behind stacks of corpses to be stepped on by the amoral anti-heroes of the violent film noir era. Violence, in one form or another, has always been on screen and always been debated.

In 1955 Blackboard Jungle surged onto screens. The drama about one stalwart teacher determined to positively influence the lives of violent inner-city students caused theater riots in England and the U.S. The well-known Bill Haley and His Comets’ song “Rock Around the Clock” opens the film and in many cities the song had to be removed because it sent teenage audience members into a frenzy. In other areas, the film was outright banned. It’s reflection of teenage disillusionment and anger tapped into something deep within the America’s youth, who were far more interested in the film’s music and fashion than any of Glenn Ford’s sermons.

The literature regarding school violence in film is lamentably skim. Contemporary film criticism is brimming with texts on nearly every subject other than this flagrantly relevant one. The debate and assumptions over whether violence in film influences people to commit their own acts of violence ceaselessly rages on, while any meaningful examination of the subject of the depiction of school violence in film remains absent. The reasons may relate to the sensitivity of the subject, but I believe that it’s because films about school violence visualize tragedy in a manner that attempts to make the incomprehensible comprehensible, which many folks don’t want to comprehend.

Say word? Wonderful takes, and I’m sweating his prose when he drops the idea that “films about school violence visualize tragedy in a manner that attempts to make the incomprehensible comprehensible, which many folks don’t want to comprehend.” For his entire pitch on the subject hop on over to the post on his site. Then poke around said site a lot. It’s froggy fresh.