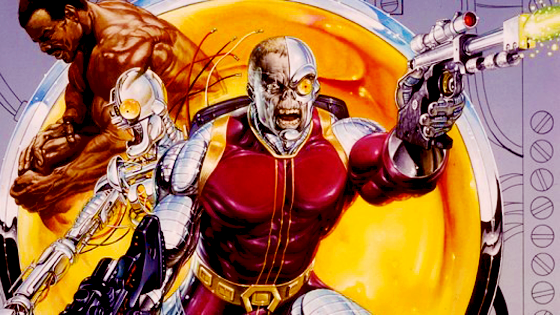 A little late on this tip, but whatever. Last night I was busy playing Mass Effect for the 35th time, before watching like nine episodes of Gurren Lagann with Bateman. So yeah! You know this! But let’s talk about it anyways. You pricks.

During a visit to the set of the show today, I was among a group of journalists shown footage from an upcoming episode, which revealed Mike Peterson (J. August Richards) is being transformed into the super cyborg Deathlok. It’s a longtime payoff for the identity of Richards’ character, which had been the subject of discussion since he was first said to be in the pilot of SHIELD early last year. His character, Mike Peterson, was ultimately not anyone familiar from Marvel Comics, ending early speculation he was going to turn out to be Luke Cage or someone else recognizable.

However, some fans did ponder if a Deathlok reveal was coming, after we last saw Mike in a very bad state – burnt, missing a leg and with a cybernetic eye implant, after he was caught in an explosion. And indeed, that’s exactly who it turns out he will become – a character that works with a previously-unknown alter-ego, given the Deathlok identity has been used for several different people in Marvel comics and is not closely identified with one character. Perhaps the most notable incarnation (certainly the one who had the longest running title of his own) is Mike Collins, the Deathlok introduced in the 1990s, so having Mike Peterson be Deathlok on the series still works as a nice nod to that history. Agents of SHIELD executive producer Jeph Loeb revealed the plan to turn Mike into Deathlok had been there from the beginning, when he was first introduced. Loeb also noted 2014 marks the 40th anniversary of Deathlok’s introduction in Marvel Comics (in Astonishing Tales #25), as he makes his first appearance in live action.

Deathlok’s debut on Agents of SHIELD is the latest in a series of reveals about Marvel characters coming to the series, including Bill Paxton’s four-episode arc as SHIELD agent John Garrett (first seen in the Elektra: Assassin miniseries) and a guest appearance from Jaimie Alexander as Lady Sif, from the Thor films.

Peterson’s incarnation of Deathlok will be seen in the next Agents of SHIELD episode, airing February 4th.

Thoughts? I’m all — whatever man — but that’s how I am generally with this show. No hate. No fervor. Tranquil acceptance.

Tags: agents of shield, deathlok, mike peterson, Sure, whatever, why not