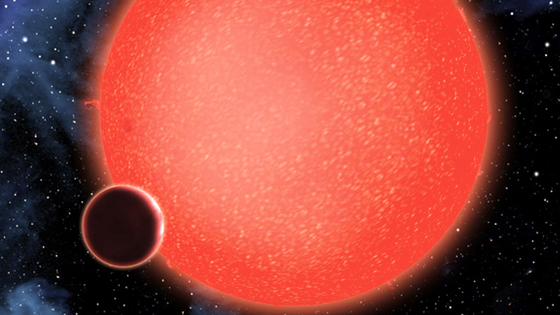 Hubble ain’t fucking around. Despite not being designed to detect clouds and shit in the atmosphere, the plucky son of a bitch is doing it anyways! Oh wow! Oh fuck! How did the telescope pull off such a feat?

40 light-years away lies the exoplanet GJ 1214b, a searingly hot “super-Earth” orbiting a red dwarf star. And thanks to the Hubble telescope, researchers believe they’ve found what lies in the planet’s upper atmosphere: thick clouds. A paper, published in theJanuary 2nd issue of Nature, relies on the telescope to settle a debate about the planet’s composition. First documented in 2009, GJ 1214b is one of several exoplanets that researchers are studying in hopes of finding a habitable world in another solar system. It’s been previously described as a “steamy waterworld,” with a density too low to be purely rock and too high to be a gas giant. But despite years of study, researchers hadn’t come to a conclusion about what kind of atmosphere enveloped it.

Footage from the Hubble telescope has been instrumental in figuring out anything about GJ 1214b. Its sensors measured light as the planet crossed in front of its star, using the differences in infrared and visible light to tease out what gases might be around it. Earlier studies pointed to two possible interpretations of this data: there could be a consistent atmosphere of water vapor or another heavy molecule, or high-altitude clouds could be enshrouding the planet and obscuring everything below. To clear up the question, researchers led by the University of Chicago’s Laura Kreidberg and Jacob Bean used the Hubble to capture precise measurements of infrared light. Data captured in 96 hours of telescope use over 11 months showed a lack of the chemical fingerprints that would indicate a cloud-free steam of something like water or nitrogen, leading Kreidberg and Bean to conclude that clouds likely blanketed the upper atmosphere.

The researchers say they still don’t know what the clouds are made of, though it could be potassium chloride or zinc sulfide. “You would expect very different kinds of clouds to form than you would expect, say, on Earth,” says Kreidberg. Understanding more about the atmosphere could change previous conclusions about the planet’s makeup: its watery composition becomes harder to verify if it’s largely blocked from view. For now, the group believes it’s also important that the Hubble was capable of performing this research at all. “I think it’s very exciting that we can use a telescope like Hubble that was never designed with this in mind, do these kinds of observations with such exquisite precision, and really nail down some property of a small planet orbiting a distant star,” says Bean. That level of precision will hopefully be improved upon by the Hubble’s successor, the James Webb Space Telescope set to be launched in 2018.