Archives
« New ‘COMMUNITY’ SEASON 5 Trailer: They had me at Ass Crack Bandit.
Astronomers (maybe) see GEYSER OF WATER ON EUROPA! » 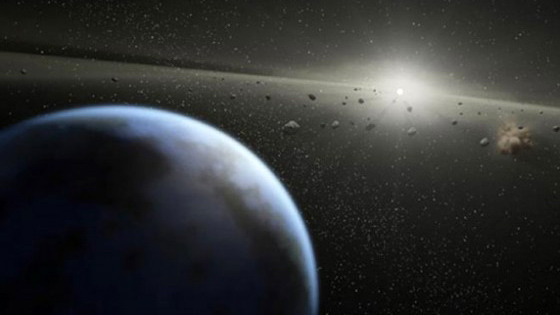 Although it is oftentimes bogged down by its own insular squabbling on this planet, humankind has a fascinating propensity to be open-minded about the possibility of intelligent life elsewhere. The unbelievable vastness of the universe coupled with the strangeness of our potentially singular existence within it seems to make many hesitant to commit to the conviction that we are alone. Rather, it’s more understandable to long for others to be with us. After all, if there’s a whole lot of life here, then surely it can conceivably happen somewhere else. And while some believe that here and elsewhere have already mixed and intelligent life forms have visited from afar to our pale blue dot, most supporters hold that there’s a better chance that aliens exist just outside our celestial periphery and will continue to do so until a future time when, with the assistance of technological and even social advancements, we might at last meet. But even without the realistic prospects of such a superior tomorrow in our sight, there remains a genuine willingness to take the necessary steps to get there, to reach out in the hope that we can commence a cosmic dialogue with anyone or anything that might be receptive to a human how-do-you-do.

Clearly, when it comes to communicating with intelligent aliens, such a relationship is entirely predicated on two components (each of which has an infinitesimal chance at success, but let us remain undaunted, my friends!). Firstly, we hope that they simply observe the message itself, so that our existence is made known to them. And secondly, once there is an acknowledgement of another party in the universe, they will be able to make some sense out of the conveyed message. Furthermore, in our human appeal for camaraderie, we are eager that not only is there something in the universe that can get what we make, but there is something out there that can get what makes us us—what makes us the dominant forces on our own planet and worthy members of a cosmic intelligentsia.

It’s a huge universe, and if we were to come into contact with another intelligent race, it would be a huge deal. Consequently, the enormity of this possible contact necessitates an equally huge message to be thought up and calibrated (as simple as it might end up being). So it ought to come as no surprise that, over the last several decades, many serious thinkers have crafted some serious-minded plans about the best means to package a salutation to the stars. Cosmic calls and radio signals have been sent out. Pioneer Plaques, showing a naked man and woman and several symbols, were blasted off on spacecrafts to be peeped at. And perhaps most famously, there was the Voyager Golden Record, a catalog consisting of various forms of media that depicts who we are and what life on earth is like. Up until now, a majority of attempts at transmitting representational works, messages, and images have been done for the express purpose of showing snippets of what we are all about (even if that means showing us in a perhaps undeservedly favorable light). Cumulatively, they make our ways of life known to other life.

I am particularly fond of the notion that works of art can be sensible modes of communication to broadcast or launch because they can be as insightful about the human condition as anything else. Ideally, art conveys powerful, universal messages within their respective stories, snapshots, or structures that could, with any luck, translate throughout the universe. With this end in mind, choosing the best and brightest of our art works has been the protocol of such interstellar messaging; if we are to introduce ourselves to other intelligent life forms, then the thinking goes that we ought to show them just how intelligent and creative we can be.

However, the more I think about it, the more I sense we haven’t gone far enough in this process; we haven’t thought it out as humanly as possible. The great minds have been too busy figuring how to extend our hand properly without much thought as to what might grasp onto it. And as astute as they are, this brain trust hasn’t truly taken into account the need for mutual intelligence–and mutual respect for our own intelligence–in this exchange. My conviction is that the onus of proving one’s intelligence should be on the aliens as much as it is on us, and the best technique to test their alien IQs is to bundle some truly terrible and ridiculous works of art in with the great masterpieces so they have more to think about contextually. To prove their intelligence, they have to be able to discern how dumb we can be.

In actuality, if I were to choose a ludicrous work of human storytelling or artistic invention, there’d be a near countless supply from which to draw. Humankind simply has a special knack for creating nonsense, and most works of art reflect this. But there is a movie I recently watched that would garner some serious consideration: No Holds Barred, starring the inimitable Hulk Hogan.

As you can obviously see by the looks of the trailer (and God help you if you can’t), No Holds Barred is a positively insane movie–and that’s precisely why it’s a great choice. It possesses the right combination of ridiculousness and absurdity needed to establish a basis for friendship because it is an example of our own baseness in the arts. It might, at first, be difficult for them to get a good read on us, but this narrative foray into Hulkamania would no doubt give them a much better sense of how far we’ve come as a society, and how far we still need to go (important insights to know about anyone that might become a part of another’s life). And to pretend that we are always masters of the arts (and of the earth, for that matter), would be untrue and a bad way to start an interstellar friendship. We ought to acknowledge that we aren’t perfect, that we can and often do slip up, yet we are nevertheless still determined to let the universe know that we are here, in all of our glorious imperfection. Throwing a work of art like No Holds Barred into a catalog of human achievement would give any intelligent alien a broader perspective on what we are capable of, for good or ill. When placed beside a great work of art, the movie affirms that we can make hilariously bad things, and ideally the extraterrestrials will be intelligent enough to discern the difference between what’s great and what’s bad. If they can’t appraise it correctly alongside the better, then we know where we stand with them: that, unfortunately, they just aren’t smart enough for us.

And in the off chance that we meet someday and these aliens can’t handle our dynamism and variety, then we probably shouldn’t be friends at all, because, like mixing No Holds Barred in with a collection of great movies, our highs on earth are revealed most beautifully with our lows. We may have plenty of the latter, and not enough of the former, but that’s just how it works–that’s just who we are. As the great Marilyn Monroe (probably never) said, “I make mistakes, I’m out of control, and at times hard to handle. But if you can’t handle me at my worst, then you sure as hell don’t deserve me at my best.” Any prospective intelligent life-form partner in the universe ought to know that Marilyn speaks for us all—even for Hulk.

So, my fellow intelligent humans, which ridiculous work of art would you shoot off into space to convey human artistic variety? Which low would you send up above?