China launches LUNAR ROVER. All exploring the Moon and such. 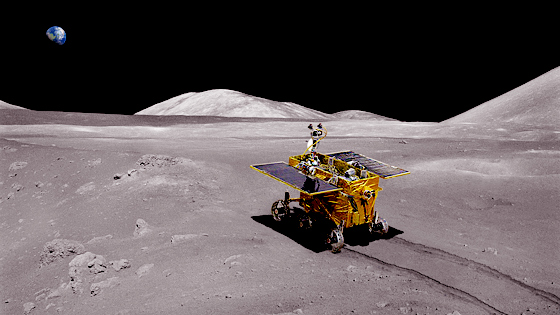 China’s on the moon! Or, their lunar rover shall be soon enough. The humanist in me is all like “fuck yeah, humanity’s back on the moon!” The jingoist with American pride is all, “god dammit, when are we going back?!”

Over the weekend, the Chinese government did something that has not been attempted in nearly 40 years: Launch a spacecraft for a soft landing to the Moon.

On Dec. 1, 2013, the Chang’e 3 lander and rover launched successfully from the Xichang Satellite Launch Center in Sichuan, China. It’s on a direct orbital insertion path, meaning it heads straight from Earth to the Moon (sometimes, long, looping paths are taken to utilize Earth’s gravity for maneuvers to save fuel). It should enter lunar orbit on Dec. 6, orbit for a week, then land in an area called Sinus Iridum (“Bay of Rainbows”) on Dec. 14.

The rocket used was the biggest and heaviest of China’s Long March boosters, powerful enough to fling the 1200 kilogram (2600 pound) rover and lander to the Moon. Once they land, the rover will deploy and wander the surface to make scientific measurements. The instruments include the usual sorts of things for a rover: cameras, surface probes, mineralogical testing devices, and a far-ultraviolet telescope; UV light is absorbed by Earth’s atmosphere, so the airless Moon is a good platform for such an astronomical device.

The mission has a three month nominal lifespan, and is a testbed for future and more ambitious rovers. You can read more about all this at Emily Lakdawalla’s blog at The Planetary Society.

Humanity! On the Moon! Well, a rover. Still though.