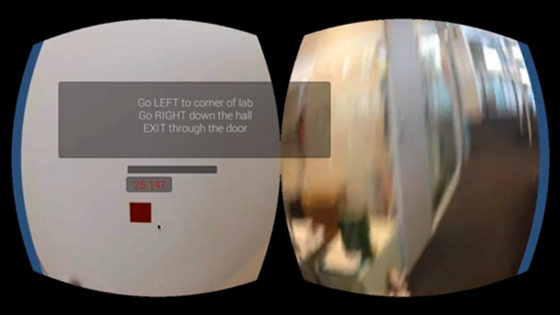 A New York artist is using the Oculus rift to simulate the feeling of the raids in Neuromancer. One of you gets to be the ass-whupping cyber-babe Molly Millions. The other is the anxiety-soaked console cowboy who must watch Molly through her own vision. Sweet Digitized Christ-Lord, this is out of control. My cyberpunk boner has speared through my computer desk.

A New York artist is working to bring one of the most visceral aspects of William Gibson’s cyberpunk classic Neuromancer to life. Case and Molly simulates the raids carried out by the book’s hacker protagonist and his mercenary partner, using a makeshift 3D camera (a pair of iPhones) and the Oculus Rift virtual reality headset to let one player ride behind the other’s eyes as they solve a series of logic puzzles to advance.

According to creator Greg Borenstein, the feeling of helplessness experienced as he rode around looking through someone else’s line of sight was completely overwhelming. “I found myself gripping the arms of my chair, white-knuckled as he flew the camera over furniture and through obstacles around the room,” he writes. “Having your head turned for you… is extremely disorienting.”

Of course, this isn’t the first time that someone has tried to turn Neuromancer into a game: one was released in 1988, and counterculture icon Timothy Leary had signed onto helm a tie-in to a failed movie based on the book. As for Borenstein’s project, we might still be a long way off from the book’s fictional Ono Sendai supercomputer, but it’s amazing what the self-described “creative technologist” has managed to cobble together out of commodity hardware, mobile apps, and open source frameworks. If you happen to have a couple of spare iPhones and an Oculus Rift kicking around, you can download the code now on GitHub.