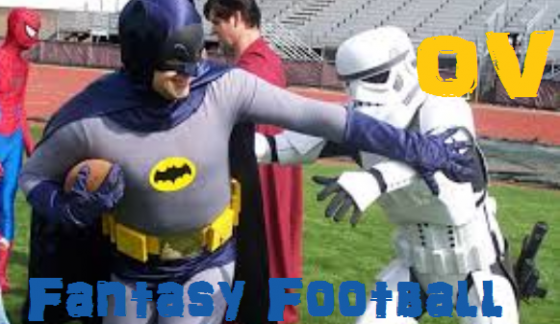 Football is back.  I am excited.  If you are reading this outside the US or are one of those soccer loving people, I am talking about the smashmouth game played on the gridiron, and not the game where you run for three hours and then call it a draw.  I understand the futility of making a post about sports on a comic/video game/movie blog is counterproductive, so I promise I will make it entertaining.

A few years back, some friends and I circulated out via e-mail ultimate fantasy baseball teams using characters from movies, comics, tv shows, and books.  Well, I’m going to do that for my Opinions Vary column this week.  Why you ask?  Two reasons.  Number 1, i’ts fun, and number 2 I am doing this at the 11th hour and honestly have no better ideas.  So feel free to make your own team complete with reasons and explanations.  Also, don’t be shy about ripping into me or each other about selections.  I will be following a few rules when constructing my team.  Those is no teleportation/ phasing, flight is also off limits, brainwashing and reading minds is out, and no magic, telekinesis, or props (Mjollnir, Iron Man suit, web shooters, etc).  So hit the jump and let’s get started.

Bullseye (Comics) – Do I really need to explain myself here?  His one power is to throw accurately.  You don’t want someone to throw too fast as if you are dealing with a non invulnerable receiver, the throw would probably kill them.

Superman (Comics) – Why use Clark Kent as a fullback and not a QB or a RB you ask?  Blocking, that’s why.  Using Supes as a blocker first can give your QB much needed protection and spring your RB for a good run.

Center – the Blob (Comics) – He’s nearly impossible to push around.

Left Guard – Rogue (Comics) – I assume this team would be playing against another super powered team.  With that in mind, and left guard being the most important O-Lineman, it would help to have someone with not only super strength, but the ability to neutralize the opponent’s defensive lineman.  Rogue fits this perfectly.

Right Guard – E. Honda (Video Games) – Not only will he wreck your car (shameless plug, buy more shirts!), but he will keep you in line with his hundred hand slap.

Left Tackle – Multiple Man (Comics) – Sure, he’s not much to get past on his own, but try getting past 4 or 5 of him at once.

Right Tackle – Doctor Octopus (Comics) – If he can’t take off the arms, it’s no longer a prop.  While he may draw the occasional holding call, his obvious appendage advantage would be too good to pass up.

Colossus (Comics) – he’s six and a half feet tall and can cover himself in metal.  It’s a unique combo of power, agility, and durability that you want at this position.

Spider Man  – He’s a perfect slot receiver.  Fast, agile, can sense danger, can lift a ton or so of weight.

Quicksilver  – Quicksilver has two main super powers.  His primary power, being a mopey douche, isn’t so useful here.  It’s the speed we are interested in.

Ok, with that, we switch to defense.  Here’s the line up I would run with.

Captain America – He’s tough, fast, durable, and knows his strategy.  He would be invaluable in stopping his opponents from moving the ball.

The Thing – I think “It’s Sacking Time” would be my favorite celebration chant ever.

Thor – Even without the hammer, the man packs a punch.  The problem is trying to get Green Bay to part with him (That’s a Clay Matthews joke for you real football fans out there)

Reed Richards – This one may seem a bit weird, but think about it.  The man can literally cover the whole field.

Beast – He’s quick and agile.  What he would lack in speed, he’d make up for in leaping ability.

Jakita Wagner – We’ve got a player from the Authority. Planetary needs to be represented as well.

Punter – Plastic Man – I imagine him turning his foot into the optimum punting surface.  But let’s face it: with this team, when are you punting?

Place Kicker – Adam Vinatieri – He’s a super hero in his own right here in the New England area.

I think that Bruce Wayne or Tony Stark would have to be the owner.  So which imaginary characters would you want on your imaginary team that plays a real sport to accumulate imaginary points?