JEFF LEMIRE is helming the ‘JUSTICE LEAGUE OF CANADA.’ So rad. 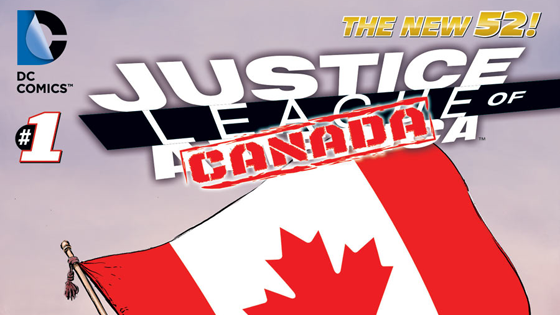 Jeff Lemire is one of the premiere talents in the game right now, son. Right now! And I am scientifically certain that 99% of his talents are derived from sucking in the clean, deliciously melodious bursts of Canadian air. The aforementioned Lemire will be bringing his Canadian-powered prowess to the Justice League game next year. And he’s doing it right, by bringing the team up north with him.

. Literally. Today at FanExpo in Toronto, DC Comics announced today that the Canadian cartoonist is taking over writing duties on “Justice League of America” in the spring. His first item of business is moving the team north of the border and renaming the series “Justice League of Canada.”

That noise you just heard was the sound of thousands of bottles of maple syrup bursting open simultaneously in celebration.

Sworn to secrecy about plot details and the majority of his roster due to the possibility of spoiling the ongoing “Trinity War” crossover in the Justice League books and the upcoming “Forever Evil” maxiseries, Lemire did share with CBR News exclusively that Adam Strange will be joining Justice League of Canada and that he will be introduced into the New 52 as a Canadian character.

Lemire also teased the introduction of an all-new character that will also be Canadian but wouldn’t reveal anything beyond the superhero’s citizenship.

The current roster of the Justice League of America — formed by the government as a counter balance to theJustice League that boasts heavyweights like Superman, Batman and Wonder Woman — consists of Martian Manhunter, Green Arrow, Hawkman, Catwoman, Stargirl, Katana, Vibe and the new Green Lantern, Simon Baz.

Lemire revealed that three of the current members will move to Canada to join Adam Strange on the new roster alongside some other “fairly major” DCU superheroes.