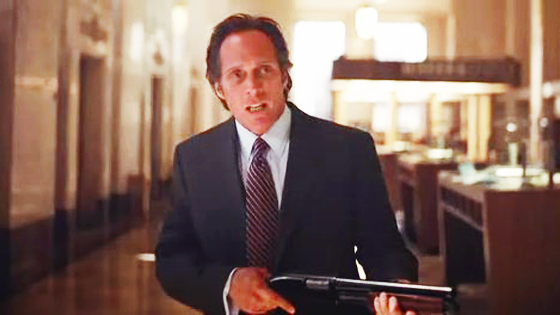 You know William Fichtner. He’s that guy. Plays a villain in a million different movies. Can’t remember what you’ve seen him in? Don’t worry. You’ve seen him, and enjoyed his performance. Unfortunately, I don’t know about this next one of his. Duder is going to be rocking the role of Shredder in the next Michael Bay Vomit Pile.

Veteran character actor William Fichtner is famous for playing bad guys. He’s well-known for his extended cameo as a crooked banker and early victim of The Joker in The Dark Knight (a role that echoed his very similar performance in Michael Mann’s Heat) and will be taking on the role the main antagonist in this summer’sThe Lone Ranger.

Well, now he can add “The Ninja Turtles’ arch-nemesis” to his resume.

In an interview with Huffpost TV Canada focusing on his upcoming lead role on NBC’s cop drama Crossing Lines, Fichtner confirmed that he’ll be playing the pivotal role of Shredder, the main bad guy in the Teenage Mutant Ninja Turtles reboot.

After a good amount of casting speculation, the only hard evidence as to what Fichtner’s part entailed was that he was a lead with “iconic stature in the Turtles’ mythology.” Further reports refuted that statement and claimed that the actor would actually be portraying “Dr. Baxter Stockman, the evil scientist who creates “Mousers,” little robots designed to kill sewer rats. He also transforms into a large, humanoid fly-creature after an incident he had with a transporter device.”

William Fichtner has personally  confirmed that he will be taking on the iconic role of the Ninja Turtles’ badass main adversary, the leader of the deadly Foot Clan, Master Shredder himself. When asked about the reboot, Fichtner said:

“I play Shredder. It’s cool. It’s one of those things that came along where I thought, ‘Really? Let me think about this for a minute.’ [Laughs] Then I was like, ‘Yeah, OK, this sounds like a journey.’ I’m very glad that it worked out, I’m really glad that I’m doing it.”