Archives
« Earth’s INNER CORE is straight-up as hot as the surface of THE SUN. No way.
Monday Morning Commute: There’s an Iron Man in my pants. And I’m Happy to See You. »

Somewhere out there, unbelievable as it may be: someone is surprised that Dead Space 3 wasn’t a resounding success. Whoever that may be clearly doesn’t see the issue with watering down a great horror game so much that it becomes a tepid co-op shooter with faux-RPG elements. In fact, if you think of all the meetings and work hours this game went through in order to get made, it’s startling to think that nobody suggested how fucking awful an idea the game was. In actuality, they probably did, but they then met with some sort of comedic ejection procedure (my money is on tossed from a first storey window by two burly security guards).

Thank Dead Space 3 for fucking up horror gaming for the rest of us: no doubt convincing investors that the genre is a lame duck. Next, thank Bethesda for being confident enough to get Shinji Mikami making a proper horror game. Dreams can come true.

I honestly never though that I’d see this happen. I was convinced that horror gaming, after taking it in both ends from the double-stacked shit-parade of Dead Space 3 and Resident Evil 6, would be well and truly dead. No doubt, Mikami had his fill of seeing the genre he so effectively defined treated like a shameful jizz sock and decided that enough was enough. Strapping on his Devilman costume, Mikami storms the Bethesda board room and demands that they finance his latest project, so that he may restore honour to this once mighty genre. Admittedly, the whole process was probably a bit more business-like and formal, but the result is still the same. The master has had to come out of the shadows to show these dick kids how it’s done. 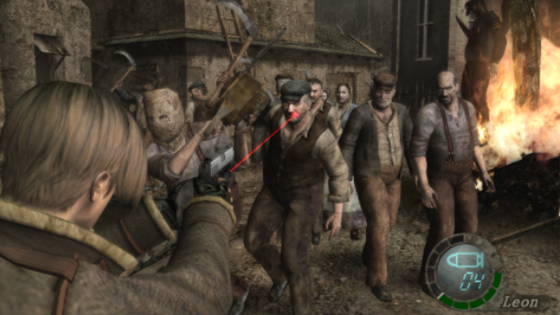 Mikami’s return to the genre doesn’t just excite me for the possibilities, but also brings with it an almighty wave of nostalgia. After all, this is the man who brought us Resident Evil 4 – a game so perfect in its execution that I wonder why anybody else ever tries anything other than copying it wholesale. RE4 is a masterpiece, for many reasons, but above all else, it is the balance between fear and empowerment that makes it work so well. Reassuringly, Mikami acknowledges this horror formula in the following video: single-handedly breaking it down for Visceral Games and the dicks so intent on crushing his legacy over at Capcom. Let’s hope that they’re taking notes so we get at least a few more decent horror games before the impending nuclear holocaust finally reduces our world to ashes.

For a second though, let’s just remember that the legacy of true fear in video games is not quite as dead as I’d like it to be (for dramatic purposes). From Software’s Souls series pretty much holds the monopoly on terror right now. They aren’t games that strike fear into the player’s heart through cheap shots and scare tactics, but rather it is the gameplay that has players on edge. So whilst I don’t actually defecate onto my cheeks like some grim fold painting, the gurgling sensation in my colon is always there. Fear works in the Souls series because it dictates the way you play: it forces you to watch the corners, proceed with caution, creep precariously and hate yourself for each and every stupid risk you take. For me, though, the fear that came from playing both Dark Souls and Demons Souls was actually too effective. Certain bosses became too intimidating, certain areas proved totally impenetrable and the fear, more often than not, stemmed from the possibility of a two-hour play session resulting in nothing but death and failure. The Souls games, along with their relishing of multiple player deaths have never made any bones about their punishing nature, so I’ll forgive them. I knew what I was getting into and I know that there are millions of players out there who crave this kind of game and the time investment it requires. More power to ’em: but I just couldn’t stick it out. 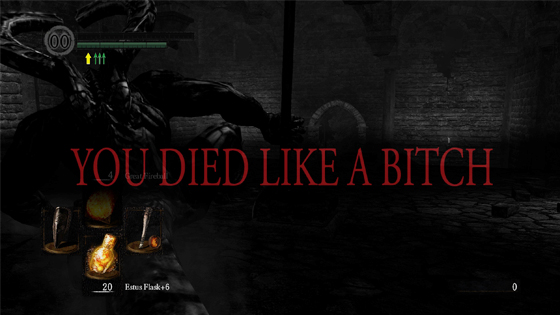 What the Souls series lacks is that panic-induced sense of fear. It misses out of the raw thrill of a last-minute headshot that just barely saves your life. As Mikami is keen to mention, it’s this unique sense of empowerment that makes horror games so much fun. It’s beyond reassuring, comforting even, to hear Mikami talk about this because it is such a fine and temperamental element, yet one that is integral to the enjoyment of a game such as Resident Evil 4. You can’t exactly place this sensation into a game, it’s not as simple as combining sound, visuals and controls to create a perfect formula for satisfaction, but you can work the elements in such a way that those last-minute headshots, those instances of unforeseen empowerment can be made to feel completely natural. The head pops like a ripe watermelon, your heart rate calms as you stare in disbelief at the corpse now disintegrating just to the left of the ominous, red zero on your ammo counter. You feel like a fucking badass. It’s the ability to hinge a game’s design upon moments like these that makes Resident Evil 4 such a fantastic game, and gives Mikami the master status that he so rightfully holds. There’s a good reason that dorks like me get so excited over him making a new game: it’s because his control and direction of a game’s elements is something akin to a conductor, an artist: making each particle work to create something so perfect that you start to question whether you’re dealing with straightforward, digital information any more. If Mikami remembers his legacy, then The Evil Within will be the Survival Horror game that fans so desperately need.