Archives
« Opinions Vary: Pretentiousness, Thy Name Is Art
WHITE HOUSE ain’t cool with CISPA as it stands. Color me skeptical. » 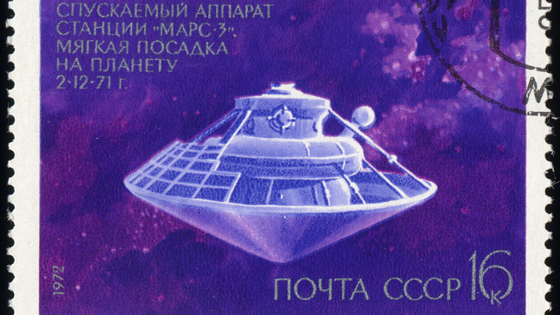 The Mars Orbiter may have found remnants from the Soviet Union’s Mars 3 Lander. Pretty cool. What would be even cooler is if they’d reveal images from the top secret Illuminati Trilateral Commission base on the Red Planet. You know the one I’m talking about. The base that is run by Steve Jobs’ in his cloned body, with terra-forming labor being provided by disappeared teens. That’d be way cooler. Oh well, we will have to settle for “news” about this.

According to the fresh news from the Jet Propulsion Laboratory there is a chance that four pieces of hardware from a spacecraft that the Soviet Union landed on Mars in 1971 appear in images from NASA’s Mars Reconnaissance Orbiter.

Vitali Erogov from Russia is the founder and administrator of the largest Russian Internet community about MSL Curiosity. Subscribers of this community did the preliminary search for Mars 3 via crowdsourcing. Erogov made scale models of what each piece should look like at the HiRISE image scale (25.3 cm/pixel), and carefully searched the many small features in this large image, finding what appear to be viable candidates in the southern part of the scene. Each candidate has a size and shape consistent with the expected hardware, and they are arranged on the surface as expected from the entry, descent, and landing sequence. (Read more)

While following news about Mars and NASA’s Curiosity rover, Russian citizen enthusiasts found four features in a five-year-old image from Mars Reconnaissance Orbiter that resemble four pieces of hardware from the Soviet Mars 3 mission: the parachute, heat shield, terminal retrorocket and lander. A follow-up image by the orbiter from last month shows the same features.

In 1971 the former Soviet Union launched the Mars 2 and Mars 3 missions to Mars. Each consisted of an orbiter plus a lander. Both orbiter missions were successful, although the surface of Mars was obscured by a planet-encircling dust storm. The Mars 2 lander crashed but Mars 3 became the first successful soft landing on the Red Planet. Unfortunately, after just 14.5 seconds transmission from the lander stopped, for unknown reasons.