Archives
« WEB-BASED BRAIN for robots goes live. Skynet shudders itself awake.
JOSS WHEDON on why AGENT COULSON lives in ‘S.H.I.E.L.D.’ I got you, bro. »

‘EVIL DEAD 4’ is actually ‘ARMY OF DARKNESS 2.’ My boomstick stiffens. 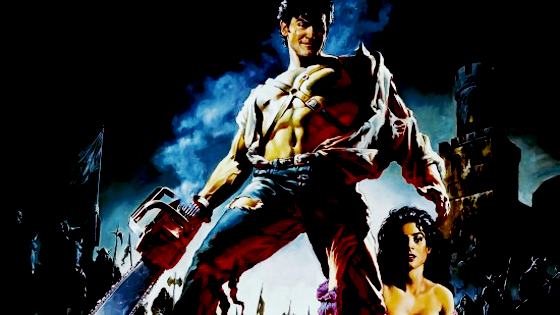 Once upon a time, Sam Raimi wanted to call his third Deadite-killing expedition Medieval Dead, and briefly flirted with the title Evil Dead III: Army of Darkness, before simply releasing the movie as Army of Darkness in 1992.

There’s no question that the film is a sequel to Evil Dead II; it uses Bruce Campbell as the same lead character, Ash, and involves many familiar Evil Dead elements. But Army of Darkness had a much more broad, comedy-influenced tone, as well as a heaping dose of fantasy and medieval elements.

Fast-forward to now, when we’ve been hearing that Sam Raimi and his brother Ivan could finally be working on the Evil Dead 4 script that has been rumored for years. But long-time producer Rob Tapert now says that the film won’t be Evil Dead 4, but Army of Darkness 2.

STYD talked to Tapert this past weekend at SXSW, and when asked about the recent Evil Dead 4 rumors he replied,

That may seem like he’s splitting hairs, but there is some meaning there. Whatever the film is called, we would presumably see more of Ash’s time-traveling misadventures, following from the director’s preferred Army of Darkness ending, in which Ash drinks too much of a sleeping potion and awakens after the apocalypse. Army of Darkness 2 would also likely continue the tone of its immediate predecessor, rather than playing like a horror film.

What does Bruce Campbell have to say about a possible fourth turn as Ash? More or less the same thing he’s been saying about it for a long time:

Sam threatens this every six months. I’ve heard this a thousand times, because in the back of his mind, he never wants to let go, because he loved making these movies. We all loved making them together. They were a nightmare to make, very difficult, but they lasted the test of time, so he’s not going to let that go, and I’m never going to say ‘no.’ It’ll be me and a walker fighting some other old guy. But that’s what he does and who knows? It may happen.