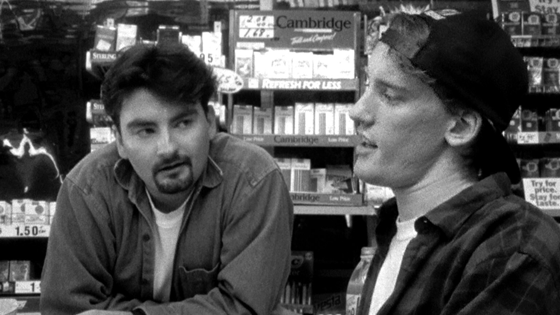 Goddamn! I really hate the fact that Clerks is creeping up on its 20th anniversary. I suppose there will be few more appropriate ways to celebrate my blase and unimpressive existence that Clerks has helped shape so greatly than by catching the epic conclusion to the franchise.

1994 was a major year in American independent cinema. Quentin Tarantino released his second movie: Pulp Fiction. Steve James’s documentary Hoop Dreams was hailed as an instant classic. And a tiny British film became one of the year’s top grossers: Four Weddings and a Funeral. That was also the year that Kevin Smith released a little movie called Clerks.

Made for just over $27,000, the gritty, raunchy comedy inspired by Richard Linklater’sSlacker heralded Smith’s pop culture influenced voice into the world of movies. He made a sequel twelve years later and recently announced that a third part would bookend his filmmaking career. In a new interview, Smith revealed a bit more of his plan with Clerks 3. He said he hopes to have it ready in 2014 for the 20th anniversary of his debut, and that he might try to make it for the same amount of money as the original. W

Tags: Clerks 3, fuck this, getting old, Kevin Smith, not really doing anything with myself, So it goes