Archives
« Hugh Jackman back as WOLVERINE in ‘X-Men: Days of Future Past.’ Whelp, the band’s together.
Cosplay: Aela The Huntress from ‘SKYRIM’ is warmth in the tundra. »

DARTH VADER energy drink in Japan. Man, they got it all. 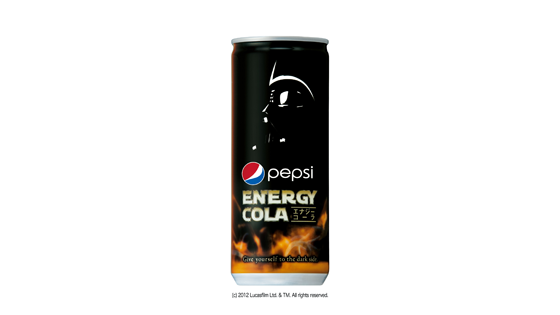 Fuckkk! I can’t think of a drink I’d rather burn my brain out on more than a fucking Darth Vader energy drink. Burn out my synapses with the power of the Dark Side!

Like everyone, Japan loves Star Wars. It also loves Darth Vader, who has sold everything from smartphones phones to pachinko on Japanese TV. Japan also loves energy drinks.
And so, we have this: Pepsi Energy Cola with Vader’s face plastered all over it. The Dark Lord of the Sith actually wants you to “Give yourself to the dark side” and drink this caffeinated beverage. The can says so! Dooooo it!

Pepsi Energy Cola is a Japan original, created under Suntory, that went on sale last summer. The drink contains royal jelly extract, ginseng, guarana extract, and caffeine, among other ingredients.

The Vader version launched this fall and is now available across the country, giving Pepsi drinkers ample opportunity to give themselves to the dark side.