SATURN’S SIZE will make you feel like the mite you are. Relativity ++ 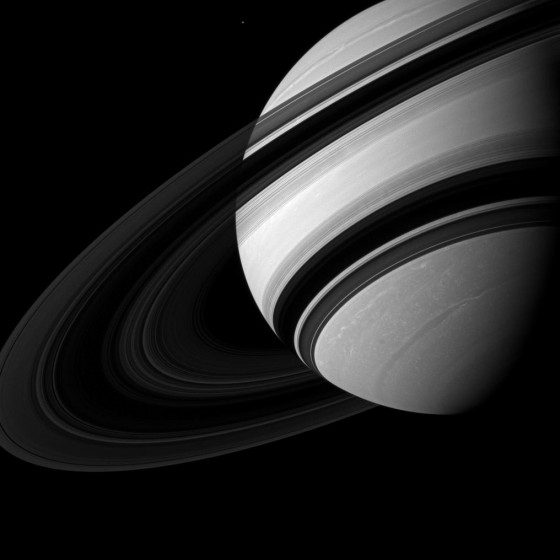 Our fat brains can’t really process things. Consider Saturn’s sheer enormity in comparison to us. Then try and comprehend how small in relation to the sun. Then appreciate how fucking small the Sun is in the grand scheme. Nosebleed incoming!

This shot of the ringed wonder was taken by the Cassini spacecraft when it was well over 2 million kilometers from the planet. The spacecraft was south of the rings, looking “up” toward the north. The Sun is shining down on the rings from this perspective, so they look darker than you might expect, and the use of a near-infrared filter accentuates storms in the southern hemisphere cloudtops.

So why does this picture grind my mind to dust? Look at the the very top, near the center. Can you see that dot of light? You might need to click the picture to get the hi-res version to see it better; that’s how small it is.

Except it isn’t. That dot of light is Mimas, a moon of Saturn, and it’s 400 km – 250 miles – across! That’s roughly the size of the state of Missouri, and compared to Saturn it’s reduced to a mere pixel of light. And even then, Saturn’s rings are still too big to fit in this picture!

The scale of the solar system crushes me. And yet there we are, poking around and sticking our noses into it. We humans are pretty awesome.