Archives
« Video: Joss Whedon wants you to boycott Mike Birbiglia’s film ‘SLEEPWALK WITH ME’, because it is hurting ‘AVENGERS’ box office.
What if movie Captain America had the body of Rob Liefeld’s Captain America? Nightmares, yo. Nightmares. » 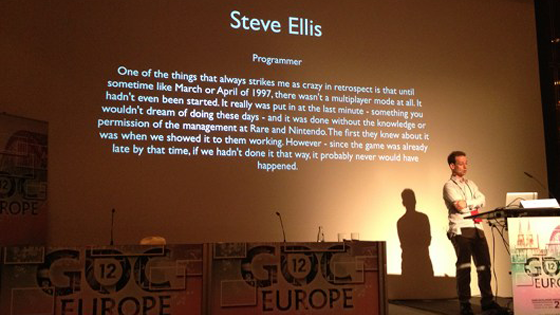 A big staple of my adolescence was playing endless hours of GoldenEye 007 with Rendar and our friends. Raging hardcore at bullshit tactics but loving every minute of it. I imagine this is a bit of a ubiquitous feeling across gamers of our generation. Low and behold some crazy shit! The generation-defining mode was a last minute addition that the powers that be didn’t even know about.

You might know that the multiplayer mode for GoldenEye 007, the seminal N64 shooter, was only added to the game late in development. What you probably don’t know is that the mode was also added unbeknownst to the management at developer Rare and publisher Nintendo. The revelation comes by way of GoldenEye 007‘s director Martin Hollis, who delivered a postmortem presentation on the game at GDC Europe.

Hollis’ presentation included stories from many of GoldenEye 007‘s developers, including Steve Ellis, who was responsible for programming the multiplayer mode, a feat he accomplished in a month.

One of the things that always strikes me as crazy in retrospect is that until something like March or April of 1997, there wasn’t a multiplayer mode at all. It hadn’t even been started. It really was put in at the last minute – something you wouldn’t dream of doing these days – and it was done without the knowledge or permission of the management at Rare and Nintendo. The first they knew about it was when we showed it to them working. However – since the game was already late by that time, if we hadn’t done it that way, it probably never would have happened.

Hollis said that “quite a few features” were “snuck in” throughout development, which he chalked up to management trusting the team. “I’m sure there were six-month stretches where no member of Rare or Nintendo management came into the team offices,” he said. “Which is really quite extraordinary, and all credit to them that they felt able to take that much of a leaned-back approach and place that much trust in the team.”

So there you have it, GoldenEye 007‘s multiplayer mode – a vital, fondly-remembered component of a landmark game – was unplanned, coded in a month and might never have existed at all if it weren’t for some serendipitous managerial oversight.