Archives
« Russell Crowe wants to direct a BILL HICKS BIOPIC. This will be uh, interesting.
The NEXT METAL GEAR SOLID’S engine will be revealed AUGUST 30. Scissors, or something. » 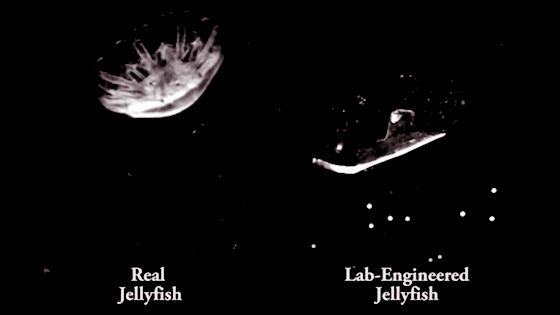 One day some brilliant biophysicist was hanging out at the New England Aquarium when he thought something I would have never dreamed. Dude said to himself, “I can build a jellyfish”, whereas usually I’m like “man…the fish, they like, swim. Really well.”

One day at the New England Aquarium in Boston, biophysicist Kit Parker saw a jellyfish and said “I know I can build that.” As Nature reports, when the idea came to the Harvard University professor, he saw it as a way to understand the “fundamental laws of muscular pumps” that could eventually be used to create replacements for damaged human hearts. With help from other researchers at Harvard and the California Institute of Technology, a juvenile moon jellyfish was created with a single layer of rat heart muscle. When an electric field was applied to the artificial jellyfish, it would move like the real creature would, and similar to how a muscular pump would react to electric pulses.

According to The Guardian, the jellyfish took four years to create and scientists have already started working on more complex marine life with plans to eventually build a human heart. In the meantime, Parker plans to use the technology to help test new drugs. Take a look at the following video for an in-depth explanation of the project while checking out the jelly in action.