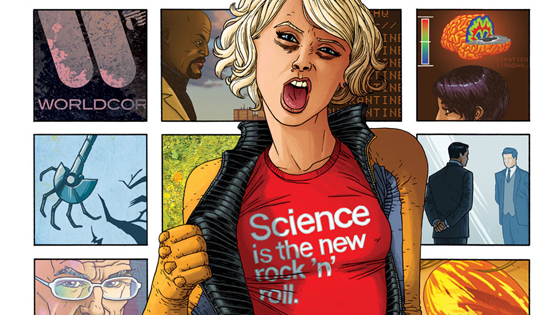 Like plenty of people working behind the scenes in the comic book industry, Eric Stephenson has a creative side that doesn’t always see the light of day due in part to his daily responsibilities as the publisher of Image Comics. In the company’s early days Stephenson worked closely with Rob Liefeld as editor and co-writer on books like “Brigade,” “Supreme” and “Youngblood.” After moving full time into the realm of editing, Stephenson was named Publisher in 2008. Now, when not reviewing potential new series for Image, which is having a renaissance these days thanks to books like “The Walking Dead,” “Morning Glories,” “Prophet,” “Saga” and dozens of others, he’s coming up with stories he wants to tell. One such tale is the November-debuting “Nowhere Men,” which he’s working on with “Hector Plasm” artist Nate Bellegarde.

Announced at the Image Comics Experience panel at Comic-Con International in San Diego, the series takes a look at a reality where a quartet of scientists have changed the world and risen to rock star status, publicly worshipped for their individual work as well as their collaborative efforts. Dade Ellis, Simon Grimshaw, Emerson Strange and Thomas Walker came together to work for World Corp., making a huge impact both good and bad when they did.

You can read the interview right here.