‘BEFORE WATCHMEN’ Is A ‘Love Letter’ To The Original, Dan DiDio Says. Written By Empty, Parasitic Stalkers. 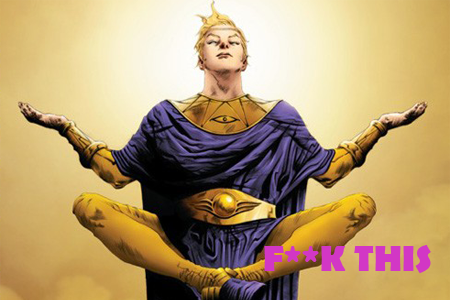 Dan DiDio is taking to The Guardian to defend Before Watchmen, calling it s love letter to Alan Moore’s creation. What DiDio doesn’t mention is that sometimes love letters are epistles scribbled in feces and blood, rambling incoherently. Rambling to such a degree because those penning the shit-blood missive are empty souls, without an ability to define their existence without the object of their love.

DC Comics Co-Publisher Dan DiDio takes to  The Guardian  to defend the sprawling prequel, which he calls “a love letter” to the seminal 1986 miniseries by Alan Moore and Dave Gibbons, and to respond to  the writer’s scorching criticism of the project as “completely shameless.”

“Honestly I can understand why he might feel the way he does because this is a personal project to him,” DiDio tells the U.K. newspaper. “He has such a long and illustrious career and he’s been able to stand behind the body of work he’s created. But quite honestly the idea of something shameless is a little silly, primarily because I let the material speak for itself and the quality of the material speak for itself.”

He reiterates that DC won’t “shy away from the controversy on this — as a matter of fact we’re embracing it because we have belief in the strength of the product and stand behind it.”

DiDio also dismisses assertions by Moore that DC is “still apparently dependent on ideas that I had 25 years ago,” saying that, “all the characters in all the universes and all that we do in comics, we’re constantly building on other people’s lores and legends. […] Realistically some of Alan’s strongest works at DC outside of  Watchmen  were built off of characters like Swamp Thing which was created by Len Wein, Superman, Batman, so many of our great characters he’s worked on and they helped build his career.”

Although it seems  highly  unlikely that Moore will ever read the prequels – he’s repeatedly said he no longer has a copy of  Watchmen  in his house – if he does, DiDio says he hopes “he looks at them with an open mind and a chance to understand this is a love letter to what he created, and more importantly that the strength of his work is allowing other people to grow and tell other stories which will hopefully inspire other creators along the way. In the way he was inspired by the creators when he was younger, we’re hoping these ideas and these books are inspiring new people, so that we continue to grow the comics business as a whole.”

Really, DiDio? You can’t figure out that an open-handed money grab using the most venerated comic book series of all time as the source for prequels, variant covers, and other white noise is shameless? Of course you can. You know it deep down in your gut. ‘Cause the only thing it is more  than shameless is obviously guaranteed to make you some easy, spineless cash.