Archives
« Check That Bought SUPERMAN RIGHTS Sells For $160,000. G’damn.
Physicist Writes Math Paper To Get Out Of A Traffic Ticket. Beast Mode ++ »

Ultra-Absorbent “NANOSPONGE” Could Be Used To Fix The Worst Oil Spills. Yeah Science! 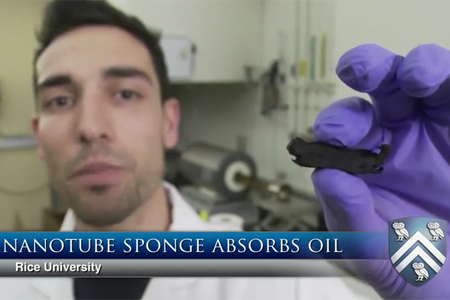 Ah! The future! Sometimes the future sucks. Like, you know, how we’re still using oil to get our asses around places. Where’s my nuclear-powered jet pack? However, the future can also be pretty swell. Like when it finds ways to clean up all those silly oil spills.

The tiny sponge featured in this video may not look like very much, but it has the ability to absorb 100 times its weight in oil. Even better, it “hates” water, meaning it’s perfect for cleaning up oil spills.

The nanosponge is the work of engineers at Rice University – lead author Daniel Hashim explains the technology in the video up top. The sponge is made out of carbon nanotubes, with some extra boron atoms added in at all the junctions to help its absorptive properties.

As the researchers write in their paper in Nature, the nanosponge boasts “ultra-light weight, super-hydrophobicity, high porosity, thermal stability, and mechanical flexibility”, along with being “strongly oleophilic”, which literally means that it loves oil almost as much as it hates water – it is super hydrophobic, after all. Even better, the researchers report it can still be used to efficiently remove oil from seawater even after being used multiple times.