FACEBOOK Supports CISPA; The New SOPA Up In Hurr. 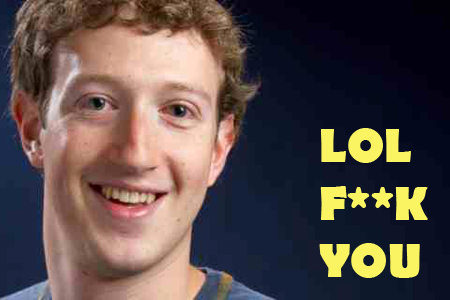 I spat about CISPA earlier this week, commenting that fat-assed corporations will claw their way into our interguts regardless of many attempts we make to repel them. Facebook is one of those douchebagorations.

CISPA, the pending US cybersecurity bill, is a terrible law, with many of the worst features of SOPA — surveillance and domain seizures and censorship and so on. What’s more, it is being supported by one of the largest Web companies in the world: Facebook. DemandProgress is asking its supporters to write to Facebook and ask them to withdraw their support.

What is Facebook thinking? They’ve signed on in support of CISPA — the new bill that would obliterate online privacy, give the military crazy new abilities to spy on the Internet, and potentially let ISPs block sites and cut off users accused of piracy.