Christopher Nolan: Bane’s Voice Is Awesome, Shut The F**k Up. 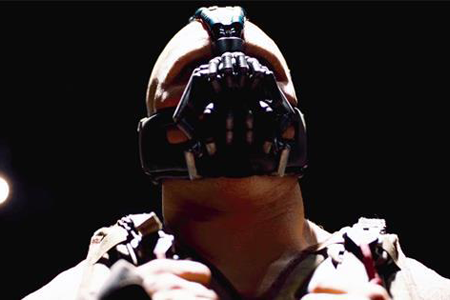 Chalk me up as one of the guys and gals who couldn’t understand a fucking word out of Bane’s mouth during the IMAX prologue. Whether it was because IMAX is always bass-y or because I’ve been to too many concerts or because as the wave of criticism suggests it’s fucking  unintelligible, I couldn’t. Christopher Nolan don’t care!

While there has been some infinitesimal measure of divide amongst viewers of The Dark Knight Rises prologue and trailer with respect to their overall awesomeness, what is 100% unanimous is the audience’s estimation of Bane: you can’t understand what he’s saying through that mask, at least not on the first listen. What’s more, Warner Bros. executives are reportedly “scared to death” of the problem and its potential impact on the film’s box office take. But director Christopher Nolan indicated that he intends to make only minor adjustments to the sound mix before The Dark Knight Rises opens in Summer 2012.

As we said in our early review of The Dark Knight Rises prologue, Tom Hardy’s performance captures the menacing physical presence of Bane as seen in his earliest comic book appearances by Chuck Dixon and Graham Nolan, but that even though his voice communicates the character’s sinister personality, the words themselves are often unintelligible through the mask that covers the majority of his face. Everybody who’s written about the film agrees, and Heat Vision reported today that it’s a serious problem as far as Warner Bros. is concerned.
Sources close to the movie say Warner Bros. is very aware of the sound issue. One source working on the film says he is “scared to death” about “the Bane problem.” And with good reason. The last Batman film, 2008’s The Dark Knight, grossed more than $1 billion worldwide, and the studio doesn’t want anything to tamper with Rise’s chances for success.

As such, some executives have urged director Christopher Nolan to ensure that the film’s main villain is comprehensible. The filmmaker has acknowledged that the dialogue may be difficult to understand at times, but told Heat Vision earlier this month that the visuals are meant to help carry the load, “Otherwise it’s just a radio play.” An unnamed studio executive elaborated, saying, “Chris wants the audience to catch up and participate rather than push everything at them. He doesn’t dumb things down. You’ve got to pedal faster to keep up.”

I’m torn on this. I appreciate Nolan’s “Fuck you, engage the medium” diegesis destruction. On the other hand I don’t think this is the right platform to make the statement, and I’d also really fucking like  to understand the movie’s villain.