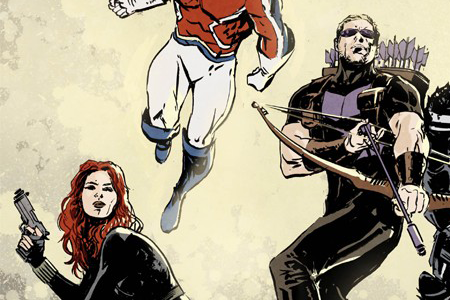 There’s more news regarding the Remender/Hardman run on Secret Avengers. Not only that, but we got ourselves a tasty look at the line-up, as well. I’m getting excited for this comic, especially since Remender can bring the dark, brooding, and comedic touch to team awesomeness.

Hit the jump for the promo and some info.

Marvel.com has  posted an interview  with Rick Remender about his upcoming run with Gabriel Hardman on  Secret Avengers, and a piece of promotional artwork reveals a potentially different roster for the team – one that includes the Human Torch and Venom.

Over the weekend, Marvel  announced the new creative team and shared a promotional piece by drawn by Art Adams  (the book’s cover artist, according to the Marvel feature). It showed new team member Captain Britain, the team’s new leader, Hawkeye, as well as Hank Pym and other current members of the team. Hank Pym doesn’t appear on the promo art from Marvel’s site, but Venom and the Human Torch do. Or  a  Human Torch, anyway; whether it’s a resurrected Johnny Storm, the WWII-era Torch he took his name from or, heck, even Toro is anybody’s guess at this point. But Marvel  has teased the return of the Johnny Storm Human Torch  already, so he seems like the likely suspect.

In the interview, Remender doesn’t talk much about the roster beyond Captain Britain and Hawkeye, but he does reveal that along with introducing a new Masters of Evil, he’s also revamping another classic Avengers villain as the team faces the Adaptoids – “sentient, hyper-evolved descendants of the original Super Adaptoid.” 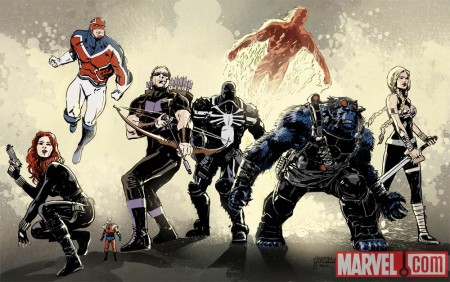