Archives
« Human Torch and Venom Joining ‘Secret Avengers’. Oh Remender I <3 You.
Variant Covers: Thor and Odin Fight For The Hammer-Penis. The Conclusion! »

“Fire has always been and, seemingly will always remain the most terrible of the elements.”
-Harry Houdini

Fire is no joke. As a small child I was enamored by two things. Small fires, and large fires. I used to sit in my basement and light monopoly money ablaze to get my jollied. That ended when I burnt a hole in the carpet. In my 11 year old brilliance I moved the couch, cut a piece of carpet out and placed it over the charred remains. It took my parent a whole 3 hours to start asking questions. I no longer start fires, but damn I love to watch them.

Pyrophobia isn’t as much of a big deal today as we have pretty much figured out this home heating thing. However, fires still occur often enough that most every town has a fire department or fire brigade.

A fire needs three things to blaze on, heat, fuel, and oxygen. Once it starts, you have to remove one of the ingredients to stop it. I believe that the reason fire can be so scary is that it destroys indiscriminately. No one can say “Fire loves me, it would never harm me.” 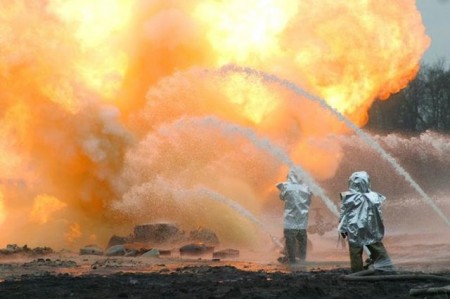 Without a doubt the craziest job in the world is oil well firefighter. The first thing you have to do is make sure the entire area stays wet. Thanks to the Leidenfrost effect, the water evaporating provides insulation so that a protective layer stays in liquid form, and thus prevents turning humans into ash. So one you put on the protective gear (Seen above) you then make your way to the burning well with explosives. Yes, explosives. So after you set the explosives up under neither the giant wall of fire coming out of the Earth, where more fuel awaits, you set it off. When I first heard this, I thought it was a joke. Using explosives to put out a fire on top of a pocket of oil sounds like something you’d see James Bond do to annoy Blofeld. Well wouldn’t you know, it works. The explosion knocks out all the oxygen, thus removing a key element from the fire triangle and we all live happily ever after.

THE ANSWER: Fires are a real problem. Look around. Every building you enter has some sort of fire prevention. It’s not like fire is going to jump out from under your bed and get you, but it is a concern. Like most fears, pyrophobia can be managed with counseling and education. If you do fear fire, just remember that fire is the reason we are the dominant species on the planet. If we never found out how to master it, we’d have probably been eaten by something with large teeth and larger claws.