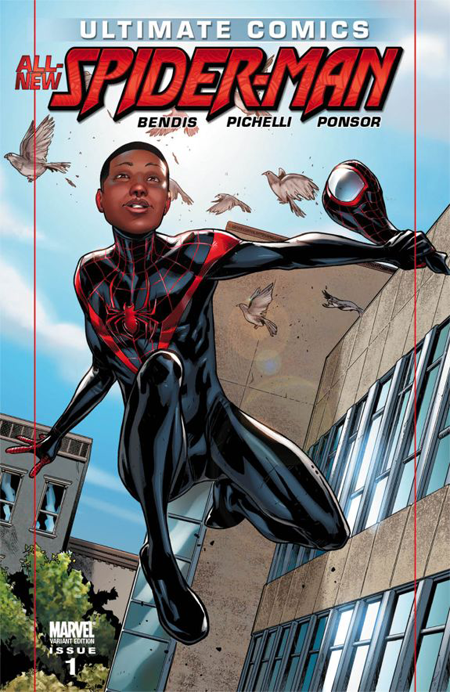 You know the story. Marvel killed off Peter Parker, and replaced him with a half-Latino, half-Black character named Miles Morales. Divisive as fuck. Forced some claim, excellent others exclaim. This week the first issue dropped with him in it, and the question quickly shifted to: is this fucking comic good?

The answer for me? Absolutely.

Updating the modern Spider-Man mythos or any character’s mythos for that matter can be a true son of a bitch.. Flipping it on its head, inverting it seems ballsy. White kid becomes ethnic. Dead parents become present. Privileged white community becomes an urban environment. The comic treads carefully on the line between cliche and modernized, and if you fall on either side I can’t fucking blame you.

The comic opens with Morales hoping to get into a charter school. Those rare reprieves where students in urban environments can eschew the poor graduation rates and rough environments for a more promising future. Morales gets into it drawing lucky #42, a recurring number throughout the title and a glorious Hitchhiker’s Guide reference. Is it providence or fate that carries the kid into the character school?

If the story is a “you can do it” uplift origin, which of those is more rewarding? Wouldn’t hard effort and dedication be the way to go? Interesting questions. Though perhaps Bendis’ implication is that the most well-meaning, intelligent youths in inner cities still need to catch breaks to succeed. Something I’d sign off on, too.

So charter school. Again: cliche, modernized, or both? If Marvel is shoe-horning this new character (or incorporating if you’re a positivist like me) then it makes sense. But you could spin it the other way and I wouldn’t lament too much. I’d just say you’re wrong! Rimshot! Canned audience laughter. 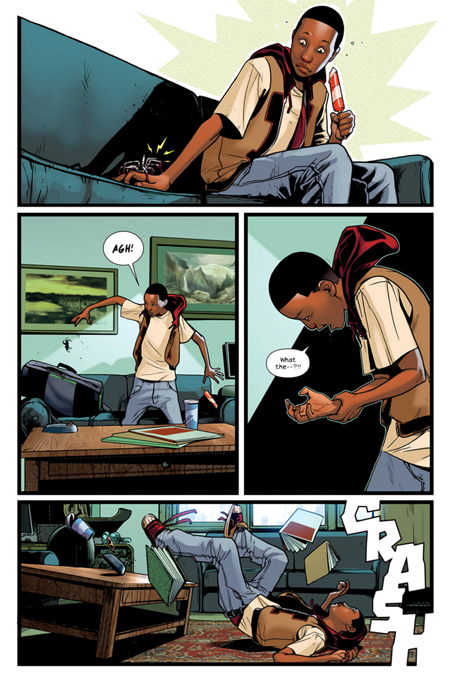 Bendis’ new Spidey tale is accompanied by fucking stunning artwork by Sara Pichelli. I’m not one to pretend to be acquainted with even the most legitimate of talent when they’re new to me: so I haven’t seen Pichelli in motion before but her work is over-the-top righteous. Even to the most staunch of MiMo (yeah it rocks out like that in Bendis’ twitter feed) detractors should snag the rag (a term of endearment) for the artwork. Like a fucking rocket, she shall burst onto the scene.

I love the comic. I love the concept of taking the character and throwing him into a situation familiar to many youths that, yes who fucking cares, Marvel wants to lure in. God forbid they cite progress for capitalistic gain. Market salvation. It’s an engine that rips up and is ubiquitous, if it can be harnessed to diversify who fucking cares. It isn’t going anywhere.

The most important and annoying refrain I heard throughout the controversy is that people “just want Marvel to tell good stories”, and they did it. Modernized, urbanized the mythos. ‘Cause frankly kids hoping to get into charter schools, even in my middle-class privileged white suburb, is a tale that make smack more of relatability than a genius white kid crushing it in a blond-haired haven in White Utopia.